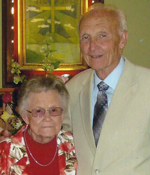 The atmosphere was charged with anticipation and excitement on Sunday, June 28, 2015, at the Flatwoods Pentecostal Holiness Church. People had gathered from far and near to witness the last message that Pastor Phillip Hart would preach as the pastor of this historic country church, where he and his wife have faithfully served as pastors for 57 years.

Hugh’s News reports that nearly 200 people were in attendance for the worship service that began at 10 o’clock. Many people who came to know Christ through the ministry of Phillip and Inez Hart were present to honor the man and woman who had been with them in various seasons of their lives–births of their children, dedications, hospitalizations, graduations, military service, baptisms, and many other life events.

Pastor Phillip Hart opened the service with the call to worship recorded in Psalm 100. The congregation and choir then joined in worship with several hymns. After Pastor Hart accepted prayer requests from the congregation, Bishop Tim Lamb led in corporate prayer.

For his text, Pastor Phillip Hart read Matthew 16:13-18 for his sermon entitled “Everybody Ought to Know Jesus”. Dr. Hugh Morgan reports,

His message was appealing and convincing as he preached with passion. He was able to use his own personal conversion and growth in grace to demonstrate how God has transformed his life.

Following the altar service, the church council presented Pastors Phillip and Inez Hart with monetary gifts and a plaque. The president of Women’s Ministries, Mabel Payton, thanked Inez for her many years of dedicated and loyal ministry as their co-pastor and pastor’s wife. The church family was then joined by members of the community for a special luncheon for Pastors Phillip and Inez Hart.