Headlines from the West

Although some secondary sources portray the International Pentecostal Holiness Church presence in the West as a southern transplant, previously lost original sources tell a quite different story. This is aptly illustrated in the rapid ascent of B.H. Irwin on the national stage chronicled in The Way of Faith, The Christian Witness and Advocate of Bible Holiness, and like papers.

Evangelistic work for the Wesleyan Methodist Church brought Irwin to Enid, Oklahoma Territory, where in 1895 he reports his “baptism with fire”. Irwin’s tantalizing account in Live Coals of Fire starts with “a cross of pure transparent fire” which is followed two days later by a physical sensation of heat.

Irwin spreads the fire-message to states in the West and South but the first Fire-Baptized Holiness state association was organized September 1896/7 in Olmitz, Iowa. Next would be Mound Valley, Kansas then Oklahoma Territory and Texas, all in 1897. The FBH hymnal Blood and Fire Songs put together by C.T. Stevens was published in Missouri about the same time. The hymnal includes songs written by Irwin himself.

Miss Mattie Mallory, a FBHA devotee, commenced work in Oklahoma City in 1897 and the next year launched a periodical called The Guide. Miss Mallory moved from Beulah Heights in 1907 and with C.B. Jernigan shaped the town charter of Bethany. Her work in time would evolve and be seen as the start of Southern Nazarene University and the Children’s Center. In 1975, the IPHC would locate their headquarters in Bethany.

FBHA state associations took shape first in the West then the South and Canada so Irwin brought them together at Anderson, South Carolina in the summer of 1898 for the First General Council of the Fire-Baptized Holiness Association. Ruling Elders appointed by General Overseer B.H. Irwin included: Oklahoma – J.M. Henson; Kansas – J.L. Wolford; Texas – Allen Hodges; Iowa – Oliver Fluke; Ontario – A.E. Robinson. Within a year, Ruling Elders would be in place at Arkansas, Manitoba, Michigan, Mississippi, Missouri, and Nebraska.

In October 1899, the first issue of Live Coals of Fire came off the FBHA presses in Lincoln, Nebraska. Called the first FBHA missionary by Irwin, John Dull, who joined the Iowa FBHA state association in 1896/7 and successfully advanced the cause there, published plans in Live Coals of Fire to reach Havana, Cuba by January 12, 1900. L.H. Wentz wrote in a 1909 issue of The Apostolic Evangel that he opened a FBHA local church in his home in Lamont, Oklahoma 10 years earlier. Three years later they erected a proper church building then a two-room parsonage. Wentz learned about the FBHA by reading The Way of Faith then attending a FBHA camp meeting 62 miles from his home.

J.H. King was chosen General Overseer at the 1900 FBHA General Council in Olmitz, Iowa. King had been serving as FBHA Ruling Elder of Ontario and pastor in Toronto. The Ruling Elders were male and female, black and white. As late as June, the final issue of Live Coals of Fire showed 140 full time evangelists scattered over twenty-three states or territories and in two Canadian provinces. 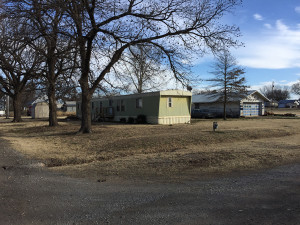 Original Location of the Fire-Baptized Holiness Church on the corner of Linn and Washington in Lamont, Oklahoma.

In December 1906, Glenn Cook brought the Azusa St. Revival message to the FBH congregation in Lamont, Oklahoma. This was the first such event for Oklahoma. According to The Apostolic Faith, B.H. Irwin spoke in tongues at a mission in Salem, Oregon. That same year, Emmanuel’s Bible School was established in Beulah Home, Doxey, Oklahoma where Daniel Awrey would serve as principal. This school produced early leaders for the IPHC in Oklahoma. While in Ohio, Awrey had first spoken in tongues in 1890 and previously served as FBHA Ruling Elder in Tennessee. Awrey made his mark at the Azusa St. Mission in Los Angeles and was featured at the Pentecostal world conference convened by Vicar Alexander Boddy at Sunderland, England. In 1910/11, Awrey was in India with Azusa St. pioneer Frank Bartleman but by 1913 was overcome by malaria in Liberia. 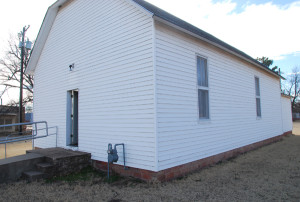 Outside of what is thought to be the building that housed the Fire-Baptized Holiness Church congregation in Lamont, Oklahoma.

The Apostolic Evangel advertised meetings in Lamont for May 10 to 30, 1907,

featuring Glenn Cook, J.H. King and G.B. Cashwell. Glen Cook is identified as having been baptized in the Holy Spirit in the Los Angeles Revival and adds that he “speaks in different languages as the Spirit gives utterance”. The proposed themes included baptism with the Holy Ghost, evidenced by speaking with tongues as on the day of Pentecost. Also emphasized was “healing of the body as in the Apostolic Church”. 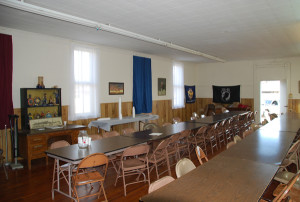 Inside of what is thought to be the building that housed the Fire-Baptized Holiness Church congregation in Lamont, Oklahoma.

In 1908, both The Apostolic Evangel and Bridegroom’s Messenger carry appeals by Harry Lott seeking support for his rescue mission for women in Oklahoma City. The following year F.M. Britton formally reorganized the FBHC in Oklahoma with only one local church, Lamont. Harry Lott was appointed Ruling Elder and the next month Lott’s Blue Front Saloon Mission became the first FBHC local church in Oklahoma City. 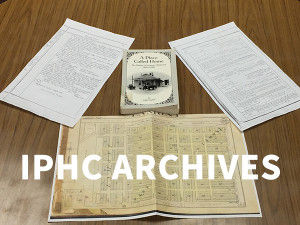 A 1929 Plat map, warranty deeds from July 8, 1901 and May 24, 1910, and a book entitled “A Place Called Home: The History of Lamont, Oklahoma” that helped verify the location of the FBHC in Lamont. These items were located in Medford, Oklahoma at the Grant County Assessor’s office, the Medford Public Library, and the Grant County Abstract Office.

Harry Lott was part of the merger on January 31, 1911 in Falcon, North Carolina and was named in the amended charter submitted in March. Official minutes of the newly merged Pentecostal Holiness Church reported 25 churches in Oklahoma. These same minutes from 1911, list Agnes Ozman LeBerge serving as an evangelist for the Pentecostal Holiness Church in Oklahoma. She was the first person to speak in tongues in 1901 at Charles Fox Parham’s fabled Bethel Bible College in Topeka, Kansas.