A Visit to Mother Emanuel Church 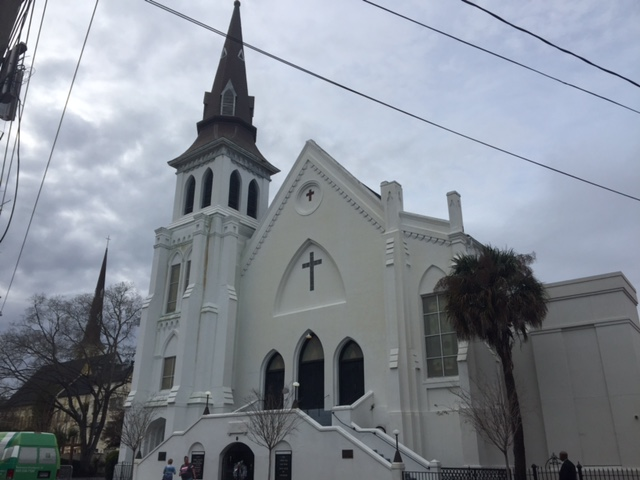 As the Tuesday afternoon meeting began, it was suggested that our group visit the “Mother” Emanuel A.M.E. church in Charleston. The basement of this church was the scene of the horrific, premeditated murders of nine African-American Christians. Dylann Roof, a 21-year-old white supremacist, failed in his effort to start a race war; but didn’t fail in the cold-blooded murders of these men and women who had gathered for a Bible study on the evening of June 17, 2015.

Bishop Charles Blake, the well-known and well-respected leader of the Church of God in Christ (a primarily African-American Pentecostal denomination), arranged for us to meet Emanuel A.M.E. pastor Rev. Eric S.C. Manning. Pastor Manning and his staff graciously greeted us in the sanctuary. He shared the history of this congregation, the oldest African-American congregation south of Baltimore, Maryland. It was obvious he had heard of Bishop Blake as he greeted him warmly. Our group was thankful for the godly favor and influence of Bishop Blake among Christians of all denominations.

After this time of sharing, Bishop Blake asked the pastor if we could pray for him. Pastor Manning replied, “Of course.” He added with a smile, “I guess as Pentecostals you’re going to lay hands on me?” We gathered around the pastor and indeed, laid hands upon him. One of our leaders prayed for Pastor Manning and another prayed for the congregation.

A few minutes later, Pastor Manning took us downstairs to the basement where the murders occurred. Arranged with tables and chairs for an upcoming event, he stopped between the tables and the downstairs pulpit. “We have stopped here because this is where the pastor, Rev. Clementa Carlos Pinckney, was killed,” he solemnly remarked. Pastor Pinckney was also a member of the South Carolina state Senate. While standing at this spot, we joined 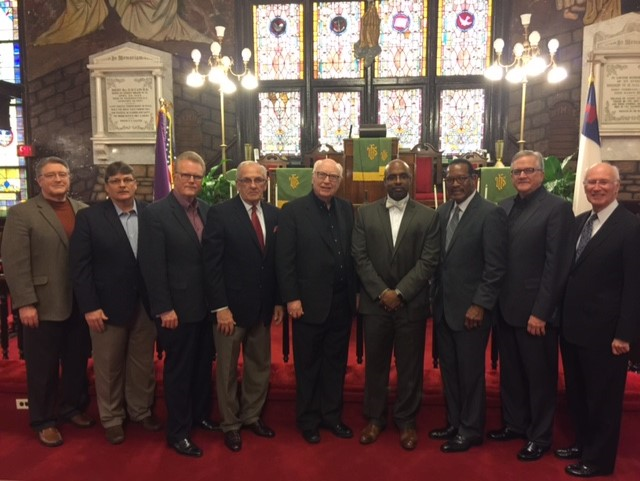 hands and again prayed for the witness of this congregation. We realized we were standing on holy ground, a floor which had been stained with the blood of martyrs.

While in the church, I knew that IPHC leaders and members in South Carolina, and millions of other Christians, had responded to these murders with genuine horror, compassion, and repentance. That knowledge gives me hope for the future.

An article by Brian Hicks in the April 9, 2011 Charleston Post and Courier told how 40% of the transatlantic slave trade came through Charleston harbor. In 1860, of the four million African slaves in the United States (primarily in the south), 10% were in the state of South Carolina, comprising 57% of the South Carolina population.

On April 12, 1861, Confederate artillery fired on the United States military base in the Charleston harbor, Fort Sumter. That began the violence of a vicious Civil War that still leaves a legacy which we are sorting out as a nation.

The other aspects of this visit to Mother Emanuel that impacted me was my reading over Christmas of Edward E. Baptist’s book, The Half Has Never Been Told: Slavery and the Making of American Capitalism. Originally from Durham, North Carolina, and now a history professor at Cornell University, Baptists’ book is a very important. It’s about 500 pages in paperback and is well documented. It is well-written with the stories of black slaves, white owners, politicians and business people from England to New England to New York to the South across to Texas, Mexico, and Cuba.

To be honest, I usually carefully skim many of the books I read. But I read every page and every word of this book. I rarely read a book a second time, other than looking for portions I’ve marked. But I’m going to read this book again. I hope some of you will read it. It may be one of the clearest manifestations of Ephesians 1:17-23 I’ve experienced; it will open your eyes.

I grew up and lived much of my life in the American south. As a white youngster, and even as an adult, I admired Confederate generals and soldiers. I knew that slavery was morally wrong and an abomination to God. What I didn’t know, and what I learned from The Half Has Never Been Told, was the depth and magnitude of complicity, money, greed, and national expansion that financially, and spiritually, enslaved whites in this demonically devised scheme. Ultimately, in the period 1810-1860, it led to the destruction of African-American family and personal identities. Sadly, that destruction continues to haunt our nation.

I’ve come to realize that I don’t, really understand the half of what my African-American brothers and sisters have experienced as part of their historical legacy. I don’t offer excuses; I offer a growing awareness and sensitivity.

But I’m also aware that as Christians, and perhaps most importantly as Pentecostals, we have been called by God to enter into the half of understanding that the Holy Spirit will give us as instruments of reconciliation.

As I write these words, I’m still in Charleston. But I’m keenly aware, as most other American Pentecostal leaders are, that the Holy Spirit movement in 1906 at Azusa Street in Los Angeles was God’s way of bringing the races in America into the half. Satan fought it bitterly and in many respects won many of the battles of the 20th Century. While many Christian leaders stood with men like Martin Luther King, Jr., it is with painful regret that sixty years after Azusa Street, most white Pentecostals stand on the sidelines rather than stand in the gap.

But maybe we’re getting another opportunity as black and white Pentecostals in our divided nation. At this PCCNA meeting a historic Race Relations Commission was formed. Perhaps that will be one of the mechanisms the Spirit of God will use to bring us into the fullness promised in Jesus Christ in Paul’s letter to the Ephesians and Colossians (Eph. 1:10, 23; 3:19; 4:13; Col. 1:19; 2:9).