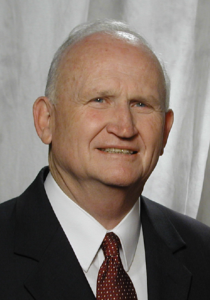 Friday, March 3, was a very special day at Holmes Bible College as friends and alumni gathered for the annual Holmes Alumni Banquet. In light of his decision to retire as president at the end of this current school year, the Holmes Board of Trustees and Alumni Board used the occasion to honor Dr. and Mrs. James D. Leggett for their service to Holmes for the past eight years. Anticipation filled the air as invited guests, General Church officials, alumni and family members gathered for the surprise event.

For 24 years, he served as a pastor in the North Carolina Conference and was elected to serve as the superintendent of that conference in 1986. He was elected vice chairman of the denomination in 1993, and from 1989 to 1997 his portfolio included executive director of Evangelism USA and president of the Extension Loan Fund.

Bishop Leggett was elected General Superintendent in August 1997 and again in 2001 by acclamation to another four-year term. In 2005, he was re-elected for a third term as Presiding Bishop. He served in this leadership role until July 2009.

Bishop Leggett has also served in various positions with the Pentecostal World Conference, the Pentecostal/Charismatic Churches of North America (PCCNA), the first president of the Pentecostal/Evangelical Family, the National Association of Evangelicals (NAE), the International Charismatic Executive Committee and Religious Alliance Against Pornography.

It was against the backdrop of these outstanding accomplishments that Brother Leggett assumed leadership of Holmes during a critical time. The future of the College was tenuous at best, but Bishop Leggett’s vision for the future was used by God to bring the school to its current standing

His leadership and administrative skills have been manifested over the past eight years in so many ways. When he assumed his leadership role as president, the only building on the campus was the Administration Building. All of the other structures, including the Holmes Memorial Church building, are a testimony to his ability and skill as a true leader, teacher and administrator. Growth and expansion continue as another building is currently under construction, and an additional student housing building should be complete in time for the fall semester. It is safe to say that Brother Leggett’s tenure has been the most productive of any president since that of Dr. Paul F. Beacham.

Thanks to a recent estate gift to Holmes, Brother Leggett was able to make the formal announcement at the Alumni Banquet that the college is debt free. To God be the glory, great things He has done!

Bishop Leggett’s greatest legacy may turn out to be the service he has rendered as president of Holmes Bible College. Hundreds of young men and women have already been influenced by his example and many more will reap the benefits of his labor as they are trained and go out to serve in the Master’s vineyards.

Bishop and Mrs. Leggett were given a number of appropriate recognition awards including the first ever Lifetime Achievement Award from the college and a substantial monetary gift. A letter from General Superintendent Doug Beacham was read by Bishop Talmadge Gardner expressing gratitude on behalf of the International Pentecostal Holiness Church for Brother Leggett’s service.

We can never truly repay Bishop and Mrs. Leggett for all they have done and the sacrifices they have made, but we want them to know that we love and appreciate them more than they can ever know.