Thoughts on our Wesleyan Heritage

Outside reference to God’s dealings with Israel and the church through Jesus Christ, as described in the Bible, IPHC theology has been primarily shaped by three historical events and persons.

The first event is the Protestant Reformation led by Martin Luther. The triggering event is usually considered when Luther posted his Ninety-Five Theses to the Wittenberg church door on October 31, 1517. This year marks the 500th anniversary of this significant event in history. From Martin Luther, we have our emphasis on the priority of Scripture for doctrine, we have the affirmation of justification by faith alone, and we have the universal priesthood of all believers.

Each of these is important in its own way for us as Pentecostal believers. We have a high view of the Bible and recognize it as the written Word of God, as well as bearing witness to the historical person of Jesus of Nazareth, the Messiah of Israel and the eternal living Word of God. Justification by faith frees us from the condemnation of the measuring stick of our own works in seeking to prove ourselves worthy of God’s love. Instead, God’s love is given to us as an act of grace and our response is one of faith in what God has done in Christ for us. Thus, our “works” take their place as a witness to God’s redeeming grace and blessings, and not a place of self-righteousness. Finally, the universal priesthood of all believers means that every Christian is a “priest” and can come before God. It also means that the gifts of the Holy Spirit are available for every follower of Jesus, and not just for those who gain recognition in public ministries. 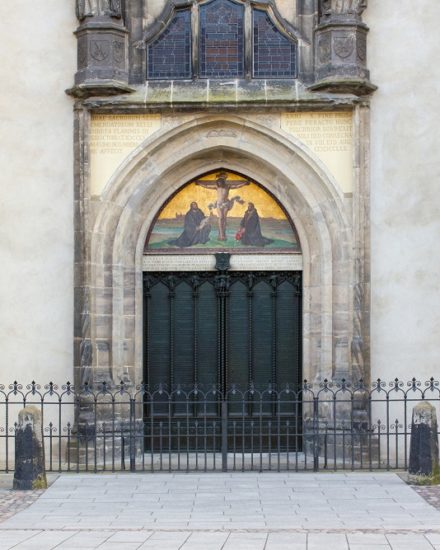 Door with theses of the Castle Church in the Luther city Wittenberg.

The second figure is the Anglican priest John Wesley, and the renewal movement he began in the 18th century in England that came to be known as Methodism. Our understanding of holiness, as a manifestation of divine love, flows from Wesley’s understanding of the Bible. Our first four doctrinal statements reflect Wesley’s version of the Thirty-Nine Articles of the Church of England. From Wesley’s movement, we gain the foundations of our ecclesiology. This ecclesiology, partly reflected in our Episcopal/congregational form of government, is one of the reasons IPHC has affirmed the fivefold ministry gifts of Ephesians 4, and grown in our understanding of these ministries. From Wesley, we have learned care for the poor, and the power of the gospel to combine redemption with the divine purpose of blessing to and for the world.

The IPHC was birthed in the cradle of the late 19th century holiness movement. From Wesley, we learned that God has begun a good work in our lives that goes beyond justification by faith and forgiveness of sins. Often called the “second blessing,” or “sanctification as a second definite work of grace,” we experience victory over the dominion of sin and are empowered to fully live as instruments of righteous blessing in the world. In many respects, sanctification is the life-flow of grace that runs through the kingdom of God. Importantly, from Wesley, we have our Arminian understanding of God’s saving grace, predestination, election, and human response.

For some time, I have been reflecting on our Wesleyan background. I grew up in a Pentecostal Holiness pastor’s home. My teenage years were spent under the ministry of the late Rev. John W. Swails at the Franklin Springs Pentecostal Holiness Church, Franklin Springs, Georgia. I still remember the impact of his sermons during a period when he was reading Wesley’s Journals. Each Sunday morning there were powerful accounts from the Journals that stirred my teenage heart. I attended Emmanuel College as a junior college and began my initial preparation for ministry in this Wesleyan Pentecostal framework.

After graduating from the University of Georgia, I was accepted at Duke Divinity School (Methodist) in Durham, North Carolina, and at Union Theological Seminary (Presbyterian) in Richmond, Virginia, (now Union Presbyterian Seminary). Torn between the two graduate programs, I finally decided to attend Union in Richmond.

There were several reasons for that decision: 1) I had a very good IPHC church situation at the Ray of Hope IPHC, about a mile from the Union Theological Seminary (UTS) campus. Rev. Carl Campbell offered me an associate position that allowed me to attend seminary full time; 2) I had an uncle, Buster LeDoyen in Portsmouth, Virginia, who was married to one of my mother’s sisters, Christine. He was a Presbyterian layman whose life reflected God’s grace and the best of Presbyterianism. The quality of his life influenced my decision. To this day, I can still hear my mother, who was Arminian, and Uncle Buster lovingly argue about predestination when we would visit. Neither converted the other! 3) When I called the two schools concerning financial aid, the Presbyterians paid almost my entire education! In retrospect, there was some sense of “predestination and election” in their generosity!

In my years of study at UTS I read John Calvin’s Institutes of the Christian Religion, Emil Brunner, Reinhold Niebuhr, and other Reformed theologians. Those were years of finding my way intellectually along the Protestant continuum of various shades of Reformed Calvinism and my Wesleyan background. My instructors were all gracious and made no effort to “convert” me. They did attempt to give me the tools to think biblically and theologically, and I hope I have had some level of success in applying what I was taught.

With that said, I have no interest in engaging in a theological controversy over these issues. I am very grateful for Reformed writers/speakers who I continue to follow, such as John Piper, Tim Keller, and R.C. Sproul. While I don’t always agree with them, I learn much as I open my mind and heart to their insights. I figure we are all followers of Jesus if we’ve been born again. In my view, there are workshops in heaven where Jesus meets with all who have engaged in fights over such doctrines. He tells us where all of us were wrong, commands us to hug and love one another, and get on with eternal life!

But at the end of the day, and in the later crucibles of pastoral ministry and denominational leadership, I came to affirm our Wesleyan-Arminian theological heritage. I find that our Wesleyan-Arminian tradition gave me a better perspective on the Bible, human experience, and the mystery of divine grace and human response. I find our Holiness-Pentecostal understanding of the Bible provides a liberating and joyful understanding of the kingdom of God.

In recent months, I’ve had several IPHC ministers ask me about our Wesleyan-Arminian roots. So, I offer you some resources that I have found particularly fruitful. Enjoy your reading and share with me some of what you are reading!