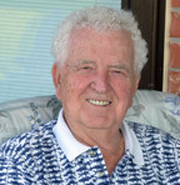 Rev. Manning was ordained in the International Pentecostal Holiness Church in 1952 after attending Southwestern College (now Southwestern Christian University) and Oklahoma City University. He pastored several churches in the Oklahoma Conference and faithfully served the conference as an evangelist.

In 1976, Dorrance was appointed superintendent of the Arizona Conference. During his tenure, churches were planted in the metropolitan areas of Phoenix and Tuscon. The Arizona Conference was comprised of churches from several ethnic backgrounds including five Latin churches and five Indian churches. Manning had a great burden for the Indian people and was appointed Indian Missions Director by the Evangelism Department. Under his leadership, three Indian missions were established.

At the 20th General Conference of the IPHC in Richmond, Virginia, Rev. Manning was elected to the General Executive Board as representative of the Western Zone.

The IPHC family is very grateful for Rev. Manning’s life, leadership, and service. A memorial service for Rev. Manning will be held on Friday, June 30 at 1 p.m. at the Linn Ave Pentecostal Holiness Church, 2632 SW 39th St, Oklahoma City, OK 73119.