Conference Begins With a Call for ‘Holy Fire’

Hundreds of delegates at the IPHC’s 28th General Conference wept and prayed at the altar for more than an hour after author and preacher Beth Moore said she is “unsettled and unsatisfied” when she looks at the current state of the American church.

“I read the New Testament over and over, and I’m not seeing what Jesus promised,” said Moore during her sermon, delivered on opening night of the convention.

“I want holy fire!” she declared. 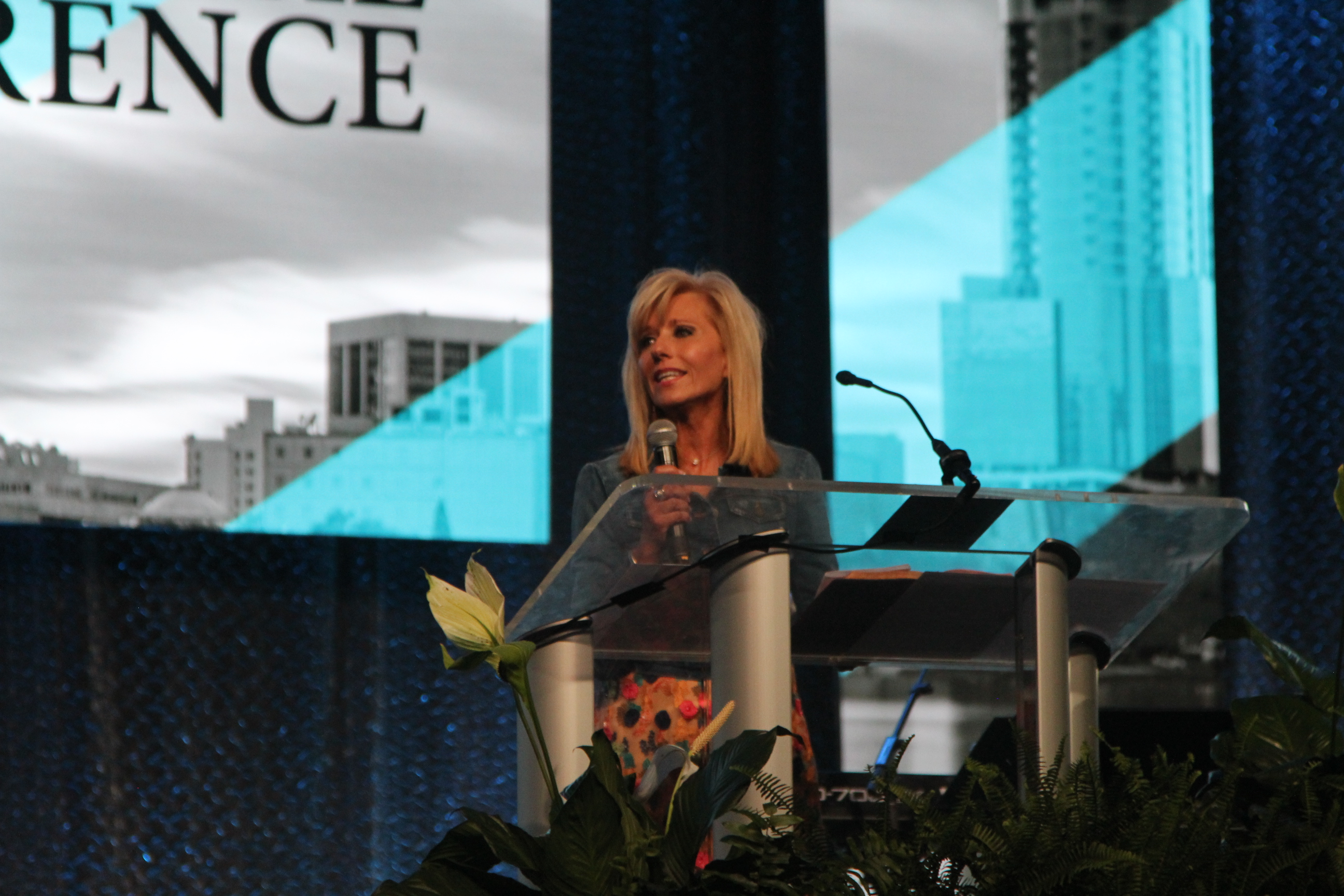 A holy hush fell over the audience as Moore, a Southern Baptist, described how the contemporary church in the United States has focused on events and programs instead of the genuine anointing of the Holy Spirit. She called on the IPHC to repent and return to total dependence on God’s power.

“Jesus wants to baptize us with the Holy Spirit and fire,” said Moore, who bases her popular teaching ministry in Houston, Texas. “We have settled for the spiked Kool-Aid of cool, cultural Christianity. We are too hungry to fast. We are too busy for prayer. It’s time for leadership to repent.”

Moore’s stirring message on July 26 capped off the first day of the IPHC’s three-day, quadrennial conference—held this year at the Orange County Convention Center in Orlando, Florida.

During opening ceremonies in the morning, missionaries and foreign delegates marched into the auditorium carrying flags from 100 nations. It was a reminder that the IPHC, which started as a revival movement in the American South, has now grown to become an international missionary force.

After all delegates took Holy Communion, IPHC General Superintendent Doug Beacham asked if everyone had been served. At that moment missionary delegates from various regions of the world went to microphones in the audience and announced that millions of people groups in Asia, the Middle East, North America, Africa and Latin America had yet to hear the gospel of Christ.

It was a powerful reminder that the IPHC still has much work to do in its global mission. 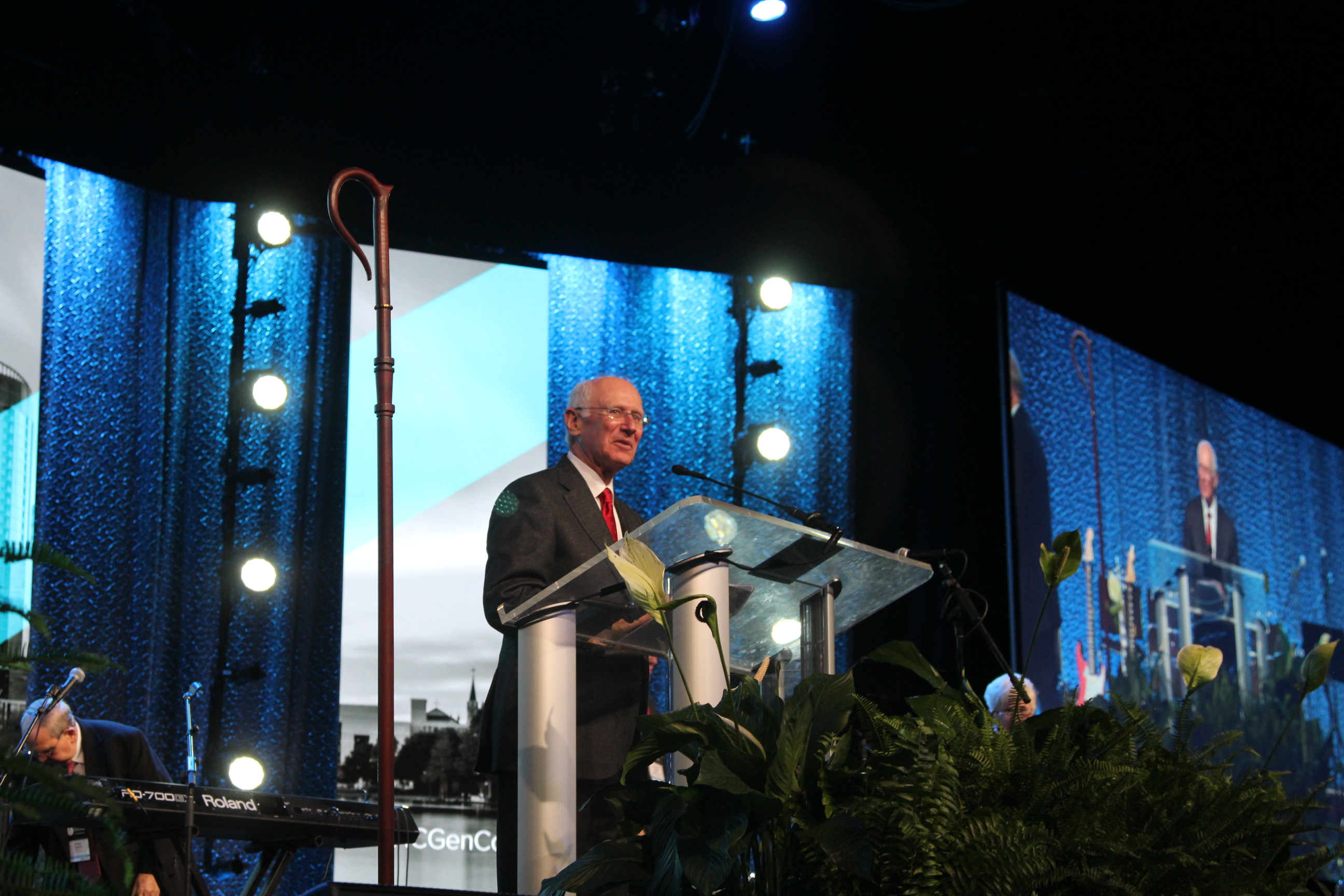 During business sessions, delegates unanimously reelected Beacham to serve another four-year term as the IPHC’s General Superintendent. Beacham told the crowd: “I can’t tell you how humbled I am to serve you.”

In another key vote, Bishop Garry Bryant was elected to serve as Director of Evangelism USA. Bryant has served as director of the Acts2Day Network for 10 years. He will now replace Bishop Chris Thompson, who is retiring from his position as head of Evangelism USA after serving in that role since 2009. He has also served as Vice Chairman of the IPHC since 2012. Thompson will be assuming the presidency of Holmes Bible College in Greenville, South Carolina.

In other business, delegates voted to extend term limits for executive officers of the church. And a special presentation was made about the 100th anniversary of the publication of The Advocate, the IPHC’s first magazine. A commemorative copy of the May 3, 1917 issue was given to every delegate.

Delegates also watched a special State of the Church video that profiled IPHC churches in various parts of the world. The video celebrated the diversity of the IPHC family and the unique ways IPHC churches are reaching their communities. Those included:

At the end of the evening, many delegates gathered for a reception to honor Thompson and to thank him for his years of service.

Garry Bryant was especially grateful for the way Thompson has served the church so faithfully. “Bishop Thompson has advanced this church in an unparalleled way during his eight years of service,” Bryant said. “He has served with excellence, character and integrity.”