Rev. Wesley Potter passed to his eternal home on August 31, 2017. General Superintendent Doug Beacham remembers, “Rev. Potter served Jesus Christ with distinction. As a pastor and conference superintendent, he led with wisdom, certainty, and with a bright smile.” 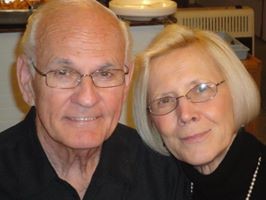 James Wesley Potter was born in New Bern, North Carolina, July 15, 1938. He was one of six children born to Mark and Hannah Potter. Wesley (he became known by his middle name) was saved at age nine at the First Pentecostal Holiness Church in New Bern and received his call into ministry at a camp meeting in Falcon, North Carolina.

Those decisions set Wesley on a relentless pursuit of training that would prepare him for a lifetime of service to Christ and the International Pentecostal Holiness Church (IPHC). He is an alumnus of both Emmanuel College in Franklin Springs, Georgia, and Holmes College of the Bible in Greenville, South Carolina. He also earned a Bachelor of Theology from the International Bible Seminary, Jacksonville, Florida. Two other institutions—Tabernacle Seminary, Baltimore, Maryland, and the National Bible College, Washington, D.C.—recognized Wesley’s leadership skills and Christian service by awarding him honorary Doctor of Divinity degrees.

While attending Holmes, Wes was part of a men’s trio that ministered in local churches and recruited students for the school. When the trio, which included Wesley, Clarence Terry, and Dan Powers, arrived for weekend services in Rockingham, North Carolina, they needed someone to play the piano. A pretty blond named Peggie Flowers was drafted as their pianist for the weekend, but, as she describes it, that assignment continued “for the next 50 years (without pay).”

Wesley and Peggie were married on February 9, 1958. Together, they pastored Pentecostal Holiness congregations for 45 years. In fact, Wesley was the founding pastor of Christian Assembly Church and School in Florence, South Carolina. They relocated from there and built Kingsway Christian Center in Baltimore, Maryland.

Following Wesley’s retirement in 2002, the Potters served as interim pastors at Living Waters Church in Rockingham, North Carolina, for five years. Most recently, they lived in Conroe, Texas, near their daughter Janna and her husband Greg Long. Their son Jay and his wife Melissa live in Atlanta, Georgia, and Jonathan and his wife Lisa reside in Birmingham, Alabama. The Potters have eight grandchildren.

Services will be held on Monday, September 4 at Christian Assembly Church in Florence, South Carolina.