Reflections After Our Historic Gathering in Orlando

More than 1,000 delegates, along with several hundred visitors, gathered in the Orange County Convention Center in Orlando, Florida, for the 28th IPHC General Conference, July 26-28, 2017. Prior to the General Conference, Discipleship Ministries hosted another well attended and successful YouthQuest, Fine Arts Festival and Day of Training for Adult Ministries in the IPHC as well.

Each event experienced the special presence of the Holy Spirit. Many remarked that the spiritual atmosphere of this General Conference was one of the most significant in recent memory.

The atmosphere was set in the opening communion service and continued through the Friday night service. The altars were filled following the evening services featuring Beth Moore and Sammy Rodriguez. Again, the altars were filled on Friday night as I shared the vision for the IPHC as we prepare to commemorate the 2000th anniversary of the death and resurrection of Jesus Christ in the period 2030-2033. 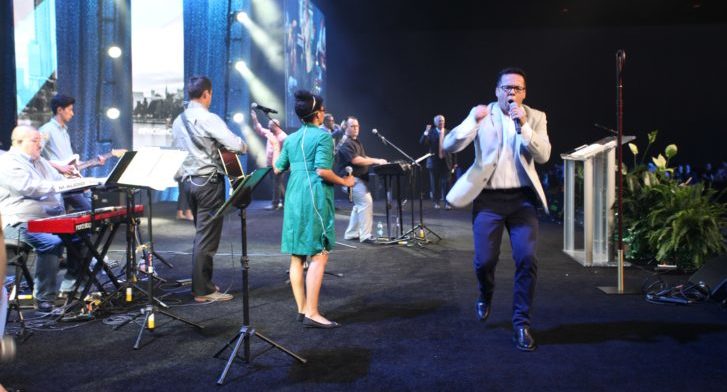 Samuel Rodriguez’ message and the worship team were marked by God’s strong presence.

The closing service, with the presentation of soil from across the USA and the world, continues to inspire our hearts. You can view most of the services and special speakers at https://iphc.org/live.

The event concluded with some changes to government and new assignments in ministry. Among the changes adopted were that the spouses of licensed and ordained ministers will be granted seat, voice and voting privileges at the 2021 General Conference. Conference certification must be met for all delegates; and for those serving in elected conference and denominational offices, one can serve three four-year terms by majority vote before the two-thirds nominating vote begins. This second item goes into effect immediately and will be the guidance for the 2018 Quadrennial Conference elections.

Throughout the week, other items of business were discussed and determined. They are reflected in the conference minutes which are available online in both English and Spanish. The final changes will be included in the new IPHC Manual available this fall. The debates surrounding the business were handled in such a way that reflected the fruit of the Holy Spirit among us. Church business can and should draw forth strong feelings. Yet it should also draw forth the character and heart of Jesus among us.

President Chris Thompson of Holmes Bible College in Greenville, South Carolina, had previously announced he would not be considered for another term as executive director of Evangelism USA. Several were nominated to fill his position. After four ballots, the former field director of Acts2Day Conference, Rev. Garry Bryant, was elected as the new executive director of EVUSA. Bishop Bryant, whose ministry is described in this issue of Encourage, is a godly leader with vision and energy.

I was also reelected by acclamation as General Superintendent, and this proved to be historic in our modern history as a denomination. To paraphrase Acts 15:28, it seemed good to the Holy Spirit and to the delegates to do that in 2013 and again in 2017. I am deeply humbled, and not in the least worthy, to serve you for the next four years as the General Superintendent and Presiding Bishop. Susan and I, along with our children and grandchildren, covet your prayers for wisdom, protection and good health.

I am praying we will have a passion to evangelize the lost—sharing our testimonies with love and compassion.

I am praying we will have the vision and courage to go to areas of the USA and world where we are not present and plant house churches and other congregations.

I am praying that our seven core values will seed generosity, justice, and mercy in each generation as we make manifest what it is to be “A Place of Hope and A People of Promise.”

I am praying that younger generations will discover God’s call and cause through the IPHC that it will inspire them to serve their generation.

One of my favorite songs is Mark Altrogge’s I Want to Serve the Purpose (In My Generation). I often hum and sing it, and you can listen to it here. I first heard this song in London, in a multi-ethnic and cultural setting. These lines continue to speak to my heart:

This article was published in the September 2017 issue of Encourage.