The Virginia History Series, a nonprofit devoted to the collection, organization, presentation, and dissemination of information about Virginia State History, has recently named Dr. H. Vinson Synan to its Historical Hall of Fame.
​

A historian and author within the Pentecostal movement 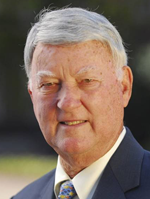 Synan graduated from the University of Richmond with a B.A. in American history in 1958, and in the fall of the same year began his teaching career. From 1956 to 1962, he helped plant three churches in Virginia and from 1967 to 1974 he planted one in Georgia. From 1963 to 1975, he also taught history at his alma mater, Emmanuel College. Synan received a full scholarship with stipend from the State of Georgia to prepare for his calling as a historian. In 1965, he completed his M.A. and in 1967 his Ph.D. from the University of Georgia in American Social and Intellectual History.

After the Pentecostal World Conference in Texas in 1970, the Society for Pentecostal Studies was formed and Synan was elected as its first general secretary and served as the editor of their newsletters for several years.

Synan has published several books, fifteen of which are related to Pentecostal and Charismatic history. He once served as the director of the Holy Spirit Research Center at Oral Roberts University. He also served as general secretary of the International Pentecostal Holiness Church as well as an assistant general superintendent. Since 1994, he has served as dean of the School of Divinity at Regent University in Virginia Beach, Virginia.

IPHC General Superintendent, Dr. A.D. Beacham, Jr., congratulates Dr. Synan on this significant accomplishment, “Congratulations to the IPHC’s Dr. Vinson Synan on his inclusion in the Virginia History Series’ Historical Hall of Fame. Recognized for his knowledge of Pentecostalism within the context of global Christianity, Synan’s scholarship combined with a vibrant spirituality are trademarks of his amazing life.”