The National Association of Evangelicals (NAE) board of directors has elected Walter Kim as its president, effective January 1, 2020. He will succeed Leith Anderson, who has served as NAE president since 2006. This was one of three top leadership elections made during the board’s semi-annual meeting in St. Paul, Minnesota.

“As a proven pastor, scholar and thought leader, Walter brings an incredible combination of skills to lead the National Association of Evangelicals into the next decade,” said Roy Taylor, chair of the NAE Board of Directors. “His ability to think critically and engage charitably has garnered respect and enthusiasm among our leaders as we consider the future of the NAE and evangelicalism in America and throughout the world.”

“Under Leith Anderson’s leadership, the NAE has reached an unparalleled period of influence as a voice for evangelicals in the USA. He has been an inspiring leader who has influenced me directly. We are thankful for his contributions to the cause of Christ in the USA.” says IPHC General Superintendent Dr. Doug Beacham. “I am also delighted that Dr. Walter Kim will assume the office of NAE President. Along with John Jenkins and Joanne Lyon, Dr. Kim is positioned to lead the evangelical movement to greater influence.”

After Anderson announced his plans to retire at the conclusion of his term in 2019, the NAE board established the NAEPresidential Search Team — composed of NAE board members — to facilitate a careful search process and to make recommendations to the NAE Executive Committee and Board of Directors. 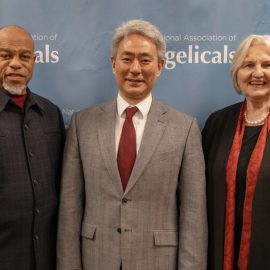 Newly elected leaders of the National Association of Evangelicals include from left to right: John Jenkins, chair of the NAE board; President-elect Walter Kim, and Jo Anne Lyon, vice-chair

Other elections made at October’s board meeting include: John Jenkins, senior pastor of First Baptist Church of Glenarden, to the office of chair of the NAE board; and Jo Anne Lyon, general superintendent emerita and ambassador of The Wesleyan Church, to the office of vice chair. Jenkins and Lyon currently serve on the NAE Executive Committee, with Jenkins as vice chair. Their new elections will go into effect at the next NAE board meeting in March 2020.

President-elect Walter Kim currently serves as pastor for leadership at Trinity Presbyterian Church in Charlottesville, Virginia, and will continue in this role as he leads the NAE. He ministered for 15 years at Boston’s historic Park Street Church, a congregation that played a key role in the NAE’s founding. Kim has been a member of the NAE board since 2013 and has presented at NAE events, contributed to NAE publications and served on working groups on a variety of issues, including ethics and church life, racial reconciliation and the politics of sexuality.

Kim received his Ph.D. from Harvard University in Near Eastern Languages and Civilizations, his M.Div. from Regent College in Vancouver, and his B.A. from Northwestern University in philosophy and history. He is an ordained minister in the Presbyterian Church in America and a licensed minister in the Conservative Congregational Christian Conference. In addition to the pulpit ministry, he has spoken at college campuses, churches, retreats, and symposia, particularly in the areas of biblical theology and cultural issues. He also serves on the board of Christianity Today. He is married to Toni Kim, and they have two teenagers.

Kim said, “I am humbled to serve the National Association of Evangelicals, which is a vital influence for good. We have before us the compelling call of gospel witness and work, and it will be an honor to lead this organization.”