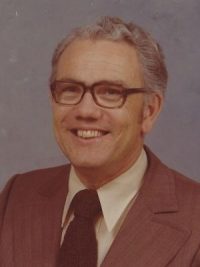 Elston Caruth Page was born on his grandfather’s farm near Roseboro, North Carolina, on May 9, 1930, to Roosevelt and Lucile Page. Though his father never finished high school, Elston graduated from Clement High School then continued his education by attending Holmes Bible College in Greenville, South Carolina, and earning a Bachelor of Arts from Lynchburg College in Lynchburg, Virginia.

The decision to study at Holmes proved to be one that helped establish Elston firmly on a path of Christian ministry that lasted throughout his life. Even though he had given his heart to Christ in June of 1944, while chopping cotton in a North Carolina cotton field, it was at Holmes that he heard God’s call and surrendered his life to preach the gospel. When a revival “broke out” in the Bible class at the college, it spread quickly throughout the campus. The outpouring continued for an entire week, during which time several students, including Elston Page, received their mandates from God. Elton believed his specific call was to missionary service.

It was also at Holmes that Elston met his future bride, Elsie Moody from Lumberton, North Carolina. They were married in Lumberton on August 23, 1953. To that union was added two sons, Phillip (Caroline) of Wichita, Kansas, and Craig (Patricia Ann) of Scottsdale, Arizona; four grandchildren and three great-grandchildren.

Following their graduation from Holmes, Elston and Elsie applied with the Pentecostal Holiness World Missions Board to go to India; but since the Indian government was restricting all missionary activity at the time, the Board declined their request with the assurance that they would be assigned when a field became available. So, in the meantime, the Pages accepted the pastorate of the Fuqua Springs Church in the North Carolina Conference, where they pastored for two and a half years (1953-1955).

In 1956, Elston and Elsie accepted an offer from the Missions Board to go to Alaska (1956-1968). When Alaska achieved statehood in 1959, the status of the work in the territory shifted from World Missions to Home Missions, whereupon the Pages accepted the pastorate of a church in Anchorage. They stayed there for eight years before returning to North Carolina in 1969. A year later, they received a call to pastor the Pentecostal Holiness Church in Wichita, Kansas. They served that congregation for the next 12 years (1969-1981).

In 1981, the Kansas Conference (now known as the Harvest Conference), elected Elston as its superintendent. During his 12 years in that role, he also served concurrently on the General World Missions Board. He was elected to a four-year term as a member of the IPHC General Executive Board.

Elston retired from public ministry in 1994. Ten years later, in 2004, Elsie went to be with the Lord. She and Elston had been married 50 years. In 2005, Elston married Lois Robinson. “The Lord has blessed me in so many ways,” he says.

On December 12, 2019, Rev. Page went to be with the Lord. IPHC General Superintendent Doug Beacham shares his memories of Rev. Page, “For nearly thirty years, I was nourished by the life of Rev. Elston Page. His kindness, generous spirit, and heart for Jesus was an inspiration to me and the IPHC. As a younger minister, I had the privilege of serving with him on a denominational task force. His wisdom, openness to new ideas, and his encouragement for younger ministers continue to impact my life. Our prayers are with his dear family.”