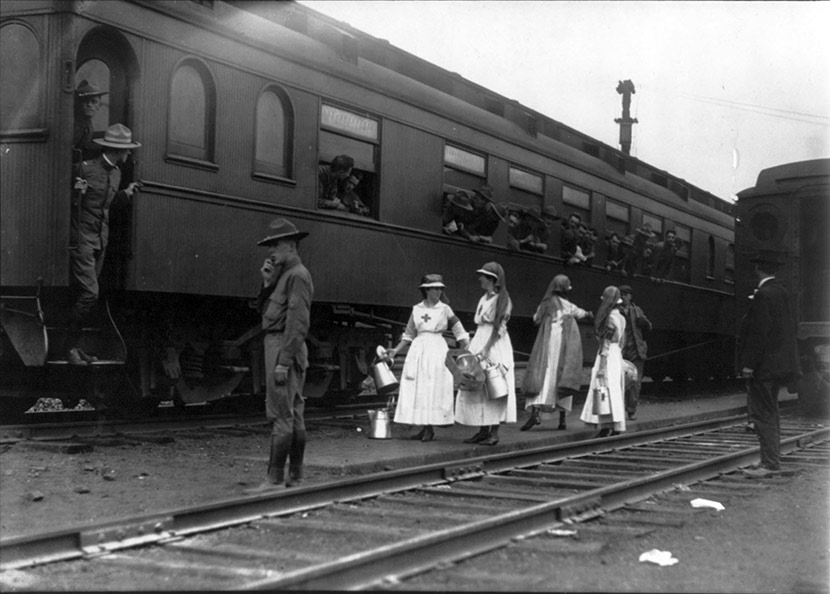 There is growing interest in learning how the IPHC and our sister churches dealt with the 1918-19 influenza pandemic. On March 17, 2020, I posted notes written by G.F. Taylor and T.A. Melton that were published in the Pentecostal Holiness Advocate (PHA), which are still visible on that timeline. 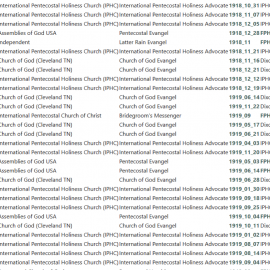 PHAs from 1917-1921 are available–and searchable–online for free at the Consortium of Pentecostal Archives. One can use the search engine for keywords like “influenza” and find reports from the PHA and other like periodicals.

From the Pentecostal Holiness Advocate

Here are a few notes from 1918 Pentecostal Holiness Advocates about the influenza pandemic in the USA that shut down everything including churches:

“The Influenza seems to have set everything out of joint all over the country. There never was such great distress prevailing over the United Stated as there has been for the last month, many requests have poured into The Advocate office for prayer. We have been trying to take them all to God, We would have been glad to publish them all, but on account of the paper being delayed, we were unable to get them in at the proper time.”

The remaining issues for 1918 tell personal stories of some who survived, but many who succumbed to the pandemic. Among those asking for prayer was TA Melton.

The April 3, 2019 issue includes a report of recovery by legendary Kenneth E.W. Spooner when the pandemic hit South Africa (below). 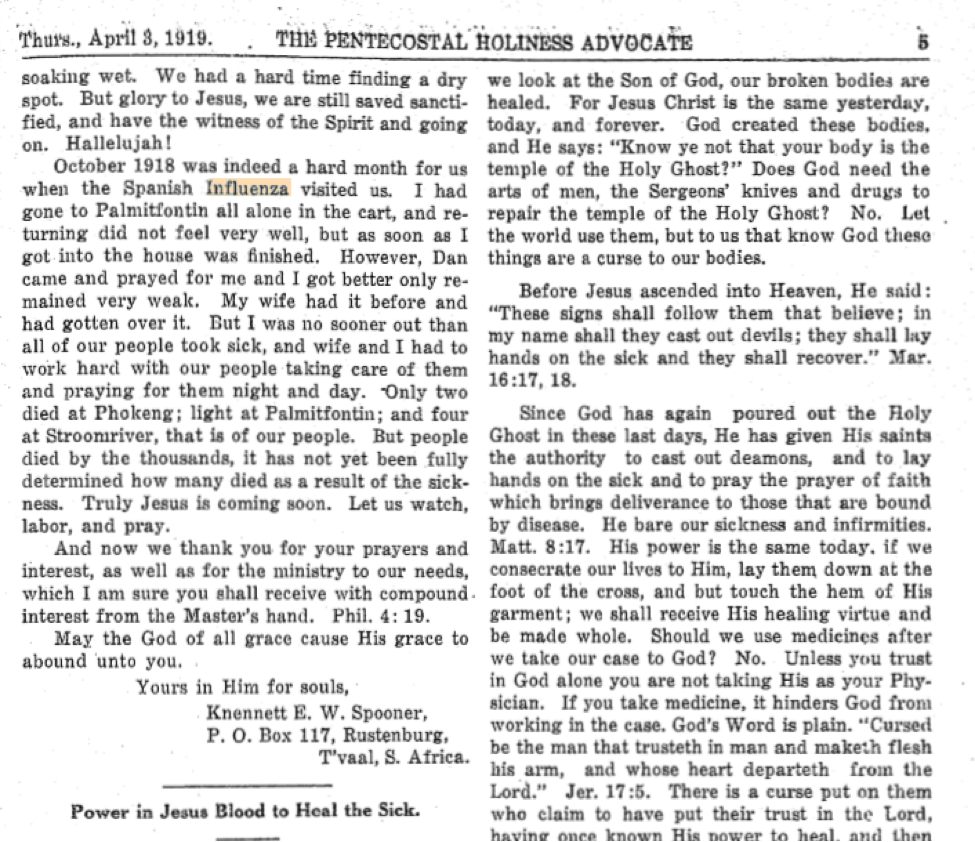 For another Pentecostal response in 1918, notice what was reported by Church of God in the personal diary of A.J. Tomlinson 1918.

“We were deprived of having the assembly on account of the influenza epidemic that has been raging for more than two months. Thousands and thousands have died of this plague. Some of our succumbed, but not many. We held the Council Oct. 22 to 29. The church work is going right on as if we had the Assembly. Overseers appointed, pastors appointed, and no block in the way. The Bible school opened, Nov. 11 with five scholars, many having been kept away on account of the influenza and will be in later. We have had cases in our own home for about six weeks. Only Iris and Milton been down of our family, but six or more friends who came in took down with it. I have prayed for at their homes as high as 30 a day. Many handkerchiefs have been prayed over and anointed and sent to the sick. Telegrams, telephone messages, letters have come in by the score calling for prayer. We have never known such an awful time before. The government closed all churches and public gatherings of every kind. We missed four Sundays, but commenced again last Sunday. The announcement came the World War had closed and preparations are being made for terms of peace. We don’t know what will be next. I will not be pastor here the coming year.”

“Many things have transpired since I last wrote. A few more students entered the Bible School. One of them, Mrs. Bennie Terrill, was taken sick about a week ago and only lived four days. She died in our home. Three sick at one time, Blanche Koon and Mary Howell were the other two. The town authorities have closed all public services again, so we can not have Sunday school or meeting. It is reported there are a thousand cases of influenza now. Many dying. Whole families sick, and in some cases no one to wait on them. Public schools shut down. Our office work much hindered because most of the staff have to be out so much, either sick, or have to wait on the sick, or help bury the dead I ordered machinery a week ago to equip a bookbindery, also a fine typesetting machine, at a cost of $3,700. The church is growing and the work is spreading in spite of all oppositions and discouragements. I am convinced now that I had a case of the influenza. I was very sick and went down to the house and lay down, but was called up in about fifteen minutes to attend to some business. The second time I went to bed, and I had to get up again in a few minutes. I thought, well, if I haven’t time to be sick I’ll just stay up. So I never went to bed any more only at night. But I had the same symptoms, and was affected just like all that have the disease. I was sick about two weeks, but God held me up. Thanks be unto Him. I never missed a time of going to the table, but several times I could scarcely eat, and several times I only ate apples. While I was sick I prayed for many sick. I never told anybody how I suffered until after it was all over. I have preached many funerals, prayed for hundreds, and on the go day and night, and all times of night. This has been an awful time and not over yet. Homer has been in France for some time, but since the war has closed we are looking for him to come home soon. We are anxiously awaiting his return. The year has nearly come to a close, but it has been a great year in many respects. My dear wife has never taken the influenza, although she has had the care of fourteen or more cases. God has sustained and held her up. Thanks to His name. He is so good to us.”

“I have surely done my best the past year. I do not know how I could have done any more unless my capacity could have been enlarged. I have strained and forced myself to accomplish what I have. But with all this I feel that what I have done has been too little for my Lord. I finished the year by preaching the funeral of Lee Stanley, a promising young minister in the church. The influenza epidemic is still raging, and quite a number of the church people are dying, but not so many, it seems, in proportion as others. Our office work is getting to be enormous. We now print 11,000 Evangels every week and we expect to have it increase rapidly the coming year. Goodbye to the old year.” 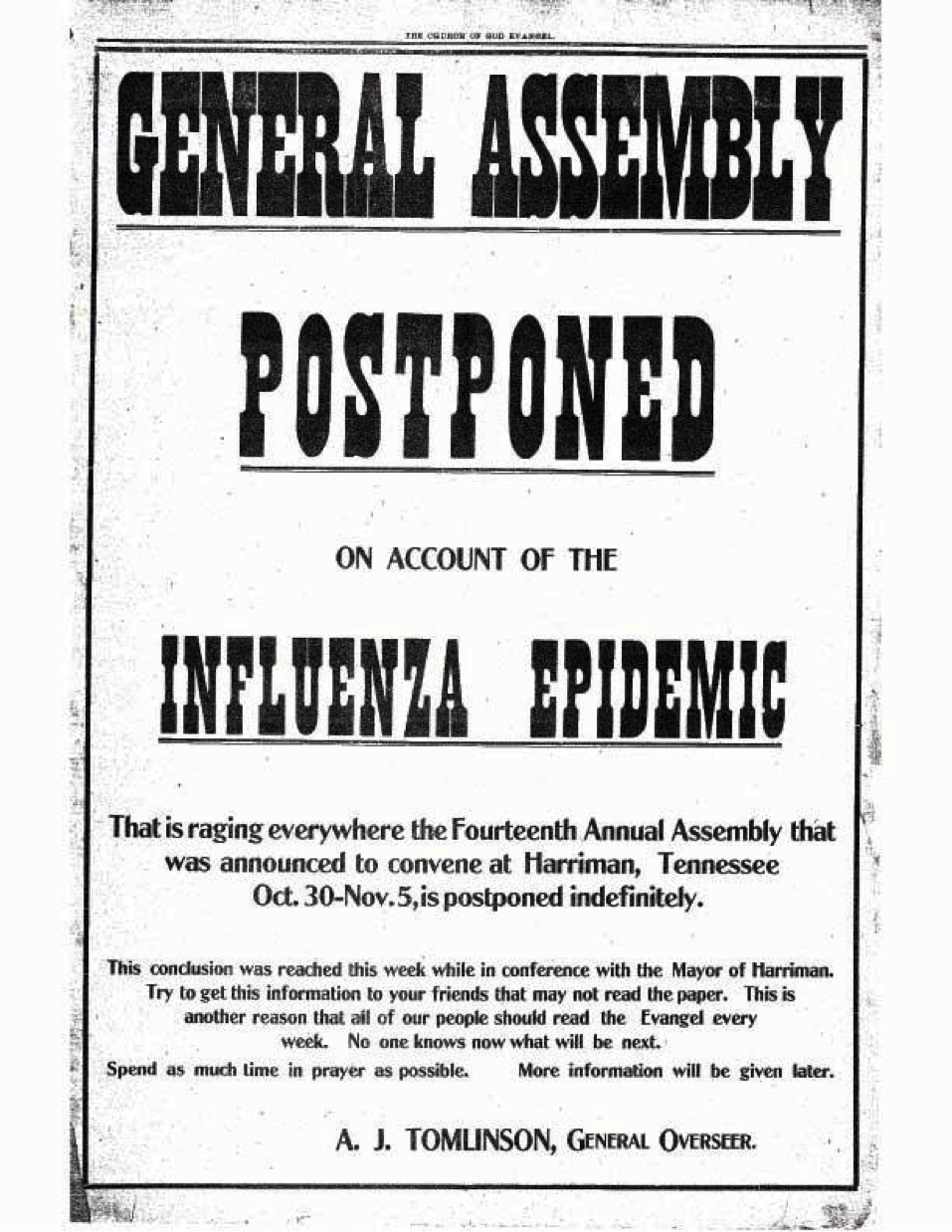 Notice postponing Church of God General Assembly in 1918. Note the call to “spend as much time in prayer as possible.”

For another look at the Church of God (Cleveland, TN) response to the to 1918 pandemic, see this article by former IPHC scholar Dr. Kimberly Alexander: 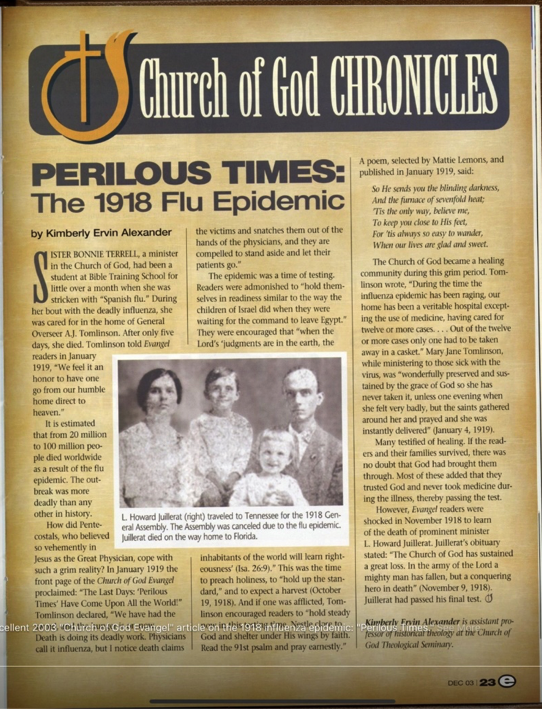 Dr. Daniel Isgrigg gives highlights about the Assemblies of God and the 1918 pandemic in Influence.

Chris Gehrz writes about about how various USA churches dealt with the 1918 pandemic at The Anxious Bench.

Visit our store to purchase digital archives of the PHA!