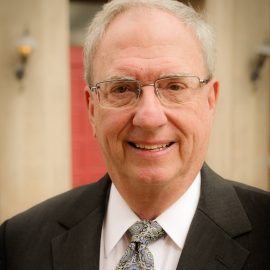 On April 1 Dr. Lou Shirey assumed the full-time leadership of the IPHC’s Lilly Grant program, “Thriving in the Seasons of Ministry.” In 2018 the IPHC was given the opportunity to apply for a Lilly Grant from the Lilly Endowment. Dr. Shirey took the lead in this process and IPHC was awarded a $1,000,000 grant to help in the personal and spiritual formation of an estimated 150 IPHC USA pastors. The Thriving Throughout the Seasons of Pastoral Ministry grant has needed the full attention of Shirey, and he has been released from his leadership of Clergy Development to help guide this vital program.

Dr. Shirey has led IPHC Clergy Development since January 2011. During that time, he also directed the IPHC World Intercession Network (WIN), engaging conference prayer leaders and cooperating with other national prayer ministries. He also guided a much-needed update of the IPHC Ministerial Credentials program. In addition to his professional duties, his personal and relational style had him engaged with local pastors and conference leaders in numerous weekly prayer calls.

“Lou Shirey has consistently demonstrated the highest levels of care for people,” said Presiding Bishop Doug Beacham. “His vast experience and education continue to be a blessing to the IPHC as he gives full attention to the pastors involved in the Lilly Grant. We are grateful for him and his family.”

Dr. Shirey served the IPHC with distinction as a United States Army Chaplain, retiring as a full colonel in 1998, having served 26 years on active duty. He is a graduate of Emmanuel College, the University of Montevallo, and Asbury Theological Seminary, where he completed his Doctor of Ministry in 2001.

Despite Dr. Shirey’s transition, the ministries of Clergy Development and World Intercession Network remain an important focus for the IPHC. In the coming months, the General Superintendent’s Office will reshape and refocus these ministries for continued effectiveness.

Dr. Shirey is married to the former Rebecca Reed of Greenwood, South Carolina. They have three children and ten grandchildren.