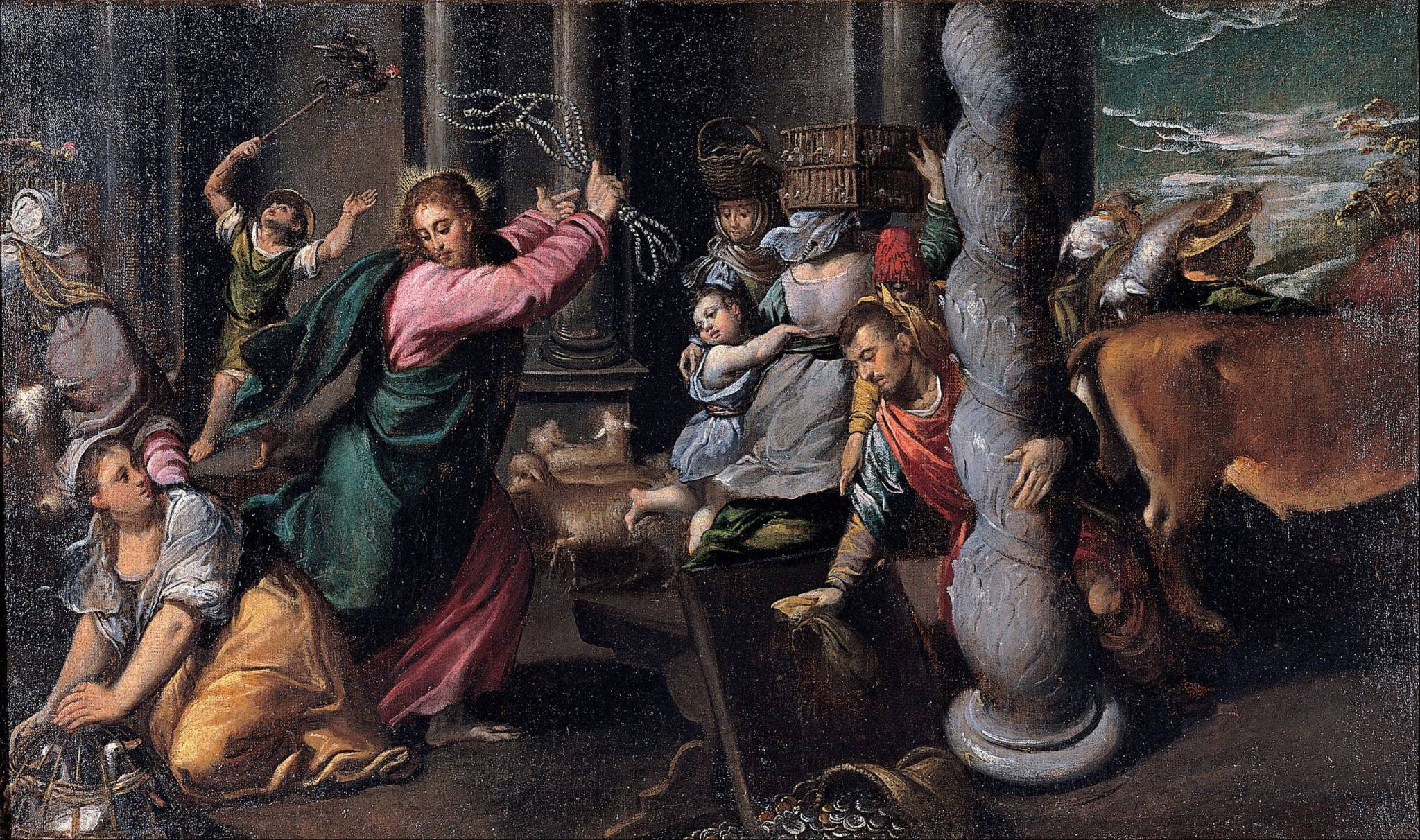 Holy Monday: The Lion and the Lamb

Giovanni enjoyed the best of everything. The son of a wealthy businessman, he could impress his friends with all that a life of pleasure promises. But along the way, his encounters with the poor awakened his pity and mercy, inspiring him to sell off his family’s belongings to help. Faced with his father’s anger, the young man renounced his inheritance, exchanging his finery for the ways of a beggar. Today we know Giovanni di Pietro di Bernardone by another name: St. Francis of Assisi.

Francis’s story may have lost some of its shock value, but his was still a radical exchange of wealth for poverty. No doubt he confused and frustrated his friends. We shouldn’t be surprised. After all, he was following Christ’s example in the gospels.

Jesus’ life must have been puzzling, too. He arrived in Jerusalem on Palm Sunday, astride a donkey, to great fanfare–and at great personal risk. He looked around the city, including the Temple Mount, before retreating to the home of friends in nearby Bethany. When He returned the next day, He again went to the Temple. At times in His ministry, He spoke like a king, the long-awaited Messiah, who would overthrow Rome. Other times, He seemed like a prophet, a new Moses to lead God’s people to freedom. And sometimes He sounded priestly, using the language of worship and sacrifice. On that Monday, He looked more like a rebel than anything else–making a whip and driving the merchants from the Temple area.

What explains this behavior? And how does it fit with the meekness we will see later in the week?

Isaiah 56:7, quoted in all three Synoptic gospels, offers the key to help us answer both questions.  Jesus enters the Temple not as a regular Jewish worshiper but as the Son, returned from a journey to find His Father’s house occupied by robbers. God’s house was to be “a house of prayer for all nations,” but the merchants had filled the space for “all nations” with a marketplace. In other words, He is passionate for God’s purposes to be fulfilled, so He enters the Temple like the Lion of Judah.

And it is this same passion–to see God’s purposes fulfilled–that leads Him to the Cross like “the Lamb of God, who takes away the sin of the world” (John 1:29). The Apostle Paul would later write of Jesus that He “emptied Himself, taking the form of a bond-servant and … humbled Himself by becoming obedient to the point of death” (Phil. 2:7-8).

If we are to imitate Jesus, both aspects are important. Zeal for God’s house should consume us, and we should be willing to relinquish our rights and recognize the power of living humbly.

The second is more likely to be difficult for Western Christians. After all, we have nothing to surrender as Jesus did. God created us; we are not His equals. Though God promises forgiveness, grace, and even a place of honor to those who repent and believe, those promises are not our birthright. We have to recognize that our relinquishment has more to do with our own kingdoms than with God’s.

Modern culture, in the form of technology and advertising and more, urges us to puff ourselves up, to exalt ourselves at every possible opportunity, to accumulate whatever money, resources, and reputation we can in order to defend against insecurity. Our world urges us to be monarch over our own empire. While the idea seems good, this process erects defenses against God’s work in our lives. So He calls us to set aside all that we’ve stored up for ourselves. Like Jesus, we should consider all we have “not … to be grasped” because what we have are gifts beyond our personal claims (Phil. 2:6).

In practical terms, this embrace of humanity has implications not only for us, but also for others. Followers of Christ are to live humbly, to “regard one another as more important” than themselves (Phil. 2:3). In Galatians, Paul puts it another way, saying we should avoid thinking too much of ourselves. That sounds difficult to our ears, especially since we are encouraged to tend to our own needs and wants, first and best. But the way of Jesus is clear. He put the needs of the whole world before His own desires, taking the cup of suffering in obedience.

God accomplished His purposes through Jesus’ obedience. Similarly, living humbly—letting go of our sense of entitlement to embrace our humanity—puts us in the path of God’s work. If we have ears to hear the call to a humble life, to relinquish our own designs and embrace the kind of life our Savior modeled, we will find that He works in us “both to will and to work for His good pleasure” (Phil. 2:13). In the Master’s hands, our humility will become a tool for making us holy.