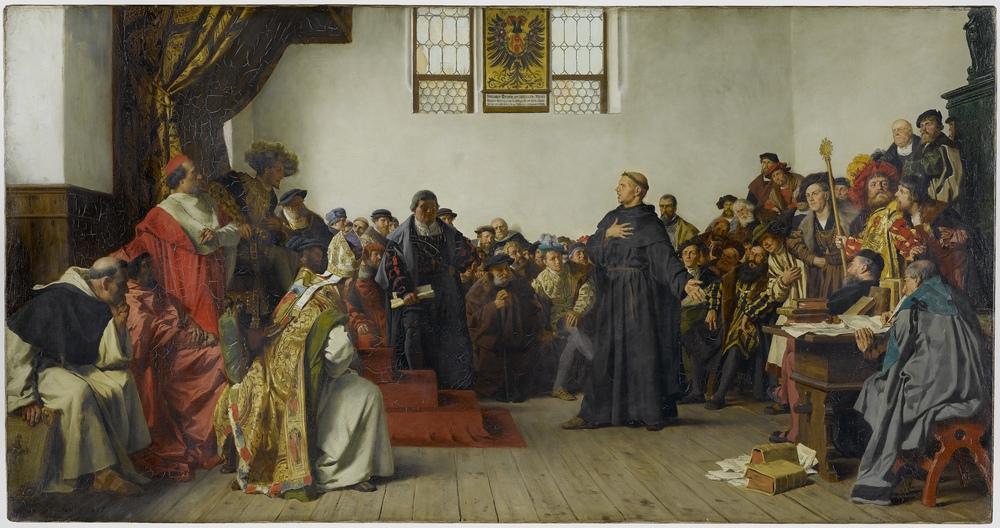 Recently Rev. W.A. Mills, Director of IPHC Men’s Ministries, reminded me of a significant event from five hundred years ago: Martin Luther’s appearance before the Holy Roman Emperor Charles V in Worms, Germany on April 17, 18, 1521. Rev. Mills and I were in Wittenberg, Germany, on October 31 and November 1, 2017 for the 500th commemoration of Luther nailing his Ninety-Five Theses to the Castle Church door, the spark that ignited the Protestant Reformation.

Rev. Mills—along with me, a student of Martin Luther’s life—recognized the importance of what Luther said to the Emperor in 1521: “Here I stand, God help me.” He and his council have made the phrase “Here I Stand” the theme for IPHC Men’s Ministries in 2021. We sat down to discuss the significance of these events and these words (You can find our audio discussion about Luther at Worms, as well as an essay about it, at https://iphc.org/discipleship/men/.) 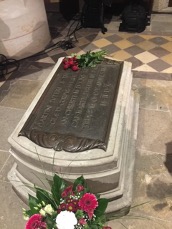 Martin Luther’s grave at All Saints’ Church in Wittenberg, Germany

When it comes to Reformation dates, most people remember October 31, 1517, the date Luther nailed the Ninety-Five Theses to the church’s door. But just as important was what occurred on April 17-18, 1521, when Luther was summoned by the Emperor to appear before the Diet at Worms.

But before we get there, let’s take a paragraph or two and put Luther in the larger context of his rapidly changing world. In my opinion, the 100 years from 1450 to 1550 comprise one of the most significant and interesting periods of human history. What occurred during those years continues to impact us today.

Luther lived when the world began its continuing shrinking process. By 1517, Portuguese and Spanish explorers had reached into Africa via the Congo River; other explorers found the Cape of Good Hope at the southern tip of Africa; Christopher Columbus had sailed west across the Atlantic in 1492; John Cabot had found Newfoundland; Vasco de Gama had sailed to India and back; and Ponce de Leon had discovered Florida.

The world of the mind and the arts was also changing. The intellectual world was energized by thinkers like the Dutch philosopher Erasmus. The sculptor Michelangelo was 42 when Luther composed the Ninety-Five Theses. Leonardo de Vinci died 18 months after the Ninety-Five Theses were published. Gutenberg’s printing press was already nearly 70 years old when Luther nailed the Theses to the church door.

On the political front, in Luther’s time Germany was in the process of gaining political identity and influence in the Holy Roman Empire. Different regions of Germany, and other European entities, offered political “Electors” who gave recognition and authority to the Emperor. These shifting political tides, in conjunction with the influence of the papacy, became part of the story of the Reformation.
In the midst of this, Europe watched with alarm the advance of Islam into southern and eastern Europe. For Luther and others, it was a time of great spiritual and potential political crisis. It reached a climax in 1529 when Suleiman the Magnificent laid unsuccessful siege to Vienna, Austria. Though he had conquered Hungary, his defeat at Vienna began the slow decline of Islam in eastern Europe. As a historical aside, the walls around the old city of Jerusalem which modern pilgrims admire, were built by Suleiman.

Following 1517, Luther took advantage of the printing press, the social media of his day. He wrote numerous tracts and books as he defended his interpretation of Scripture, which was the basis for his attacks against the abuses of the church of Rome. In August 1520 he published To the Christian Nobility of the German Nation; in October of the same year, he published On the Babylonian Captivity of the Church; and in November of that year he published On the Freedom of a Christian.

Repeated efforts by Rome encouraging Luther to recant his teachings and writings reached a tipping point. One last effort was made on June 15, 1520, when the Pope gave Luther until December 10 to recant or be excommunicated. Luther’s response was dramatic: he publicly burned the papal bull, or order, that excommunicated him. 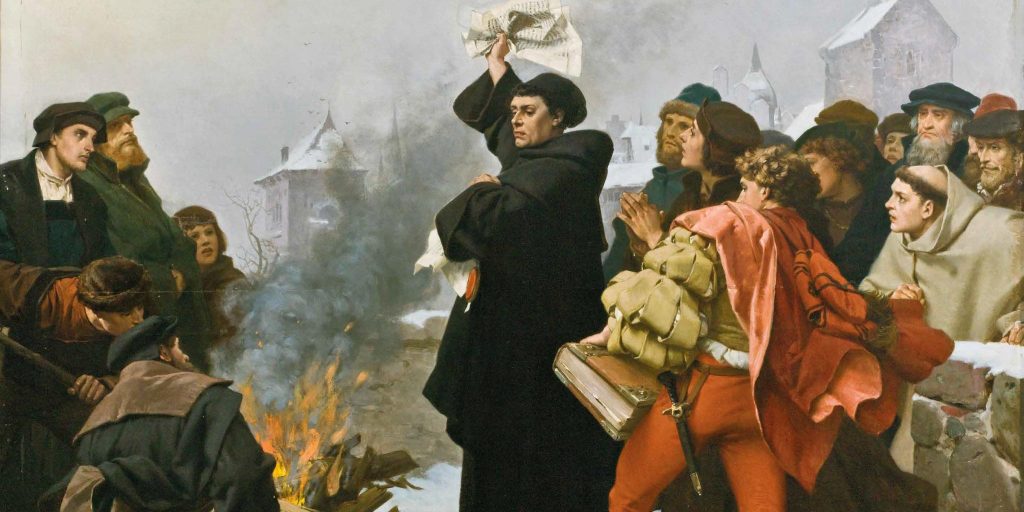 Word of Luther’s excommunication spread quickly. The crisis was more than ecclesiastical; it was also political. This was because German princes had begun to support Luther, often for reasons more politically motivated than pure religious sentiment. One of those was Fredrick III, elector of Saxony, who for various reasons gave Luther support and protection.

The former monk, now outside the church but inside the Holy Roman Empire, was summoned by the Emperor Charles V to the German city of Worms. It was an effort to resolve a rift that Rome had been unable to stop. Luther was promised protection as he made the journey from his home and base of operations in Wittenberg to Worms. Upon his arrival on April 16, several thousand people lined the streets to watch the man who was changing the world.

Luther was summoned to appear before the Emperor and his Diet on Sunday afternoon at 4 PM, April 17th. (Diet is another term for a congress or gathering of delegates.) A stack of books which he had written was on a table in the hall. The Emperor’s spokesman asked Luther two questions: did he write these books, and would he renounce what was contrary to the church?

Luther replied that he wrote the books. But he replied to the second question with these words: “This is a question of faith and the salvation of souls, and because it concerns the divine Word, which we are all bound to reverence, for there is nothing greater in heaven or on earth.” He asked for time overnight to compose his reply to the second question. His request was granted with the understanding that he would personally appear and answer the question, not simply send a written response. Luther agreed.
Overnight Luther prepared to answer the most important question of his life. The next afternoon, Monday, April 18, Luther appeared at the appointed hour of 4 PM. The other business of the Diet convened by the Emperor went long, and Luther was not called until 6 PM.

Asked again if he recanted the statements in his books that were deemed heretical by Rome, Luther spoke these words that ring in history:

“Unless I am convinced by the testimony of the Scriptures or by clear reason (for I do not trust either in the Pope or in councils alone, since it is well known that they have often erred and contradicted themselves), I am bound by the Scriptures I have quoted and my conscience is captive to the Word of God. I cannot and will not retract anything, since it is neither safe nor right to go against conscience. I cannot do otherwise, here I stand, may God help me. Amen.”

While there is some historical debate whether Luther actually said, “Here I stand,” there is no question that his intention reflects that sentiment.

From Luther we have received three theological pillars that remain essential to our understanding of the Christian faith:

So on this weekend of April 17-18, 2021, five hundred years after Luther, may we pause to reflect on what it means for us to stand on the gospel of Jesus Christ, offering genuine faith, hope, and love to our world.