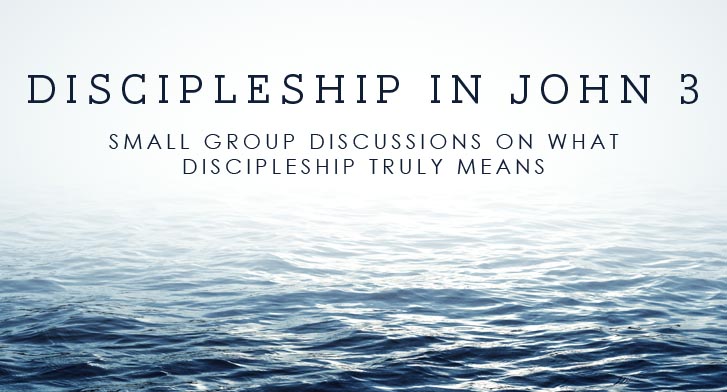 This is part 3 in a series on Discipleship. Click here to read the full series

Today I want to continue our discussion of what a disciple of Jesus looks like with particular attention given to John’s portrayal of it. Previously I noted John’s “paradigm of discipleship” according to John 1:35-51. The aspects of the paradigm of discipleship included: following Jesus, abiding with Jesus, bearing witness to Jesus, the disciple as one who is called of God, believing in Jesus or placing one’s faith in him, and finally spiritual growth, which refers to progress in the Christian’s walk with God, what some might identify as progressive sanctification. What I propose to do in this post is to use this paradigm of discipleship and apply it to Nicodemus in John 3. We hope to answer the question, what can Nicodemus teach us about discipleship?

Nicodemus is great place to start, not only because he is the first character in John’s Gospel that Jesus has a major discourse with, but also because of the questions surrounding Nicodemus’ faith or lack of faith in Jesus. Was Nicodemus a disciple of Jesus? Some answer the question in the affirmative, while others deny that he was ever a genuine disciple of Jesus. Hopefully, our application of the paradigm of discipleship will provide an informed answer to this question.

John 3 introduces the reader to a man named Nicodemus. Nicodemus was a Pharisee, a member of the Sanhedrin (3:1), and a leading teaching in Israel (3:10). We read that he approached Jesus at night. That John mentions that Nicodemus came at night tells us two things. First, that it was nighttime when he met Jesus. Secondly, John’s Gospel utilizes symbolism to teach theological truths. Words like “night,” “darkness,” and “blind” are used throughout the Gospel to refer to moral and spiritual blindness (cf. 9:4; 11:10; 13:30). When Nicodemus comes to Jesus he is lost. Whether he remains in that state is yet to be seen.

Nicodemus believes he perceives something of the kingdom of God in the signs Jesus has done (3:2). Jesus’ reply tells a different story. Nicodemus can’t see the kingdom because he is not “born again” (3:3). Nicodemus may see the signs, but he cannot see the Kingdom to which the signs point. Nicodemus can’t figure out how this metaphor exactly works out. How can a person get a clean slate, one’s sins removed, and cleansed from the inside out (3:4)? Jesus replies no one can enter the Kingdom “unless they are born of water and the Spirit” (3:5). We can give Nicodemus a pass for not understanding what it meant to be “born again.” It was not a common expression. However, he should have picked up on what it meant to be “born of water and Spirit”; after all, he was “Israel’s teacher” (3:10). Ezekiel 36:25-27 states, “I will sprinkle clean water on you, and you will be clean; I will cleanse you from all your impurities and from all your idols. I will give you a new heart and put a new spirit in you; I will remove from you your heart of stone and give you a heart of flesh. And I will put my Spirit in you and move you to follow my decrees and be careful to keep my laws.” Ezekiel’s words looked forward to the new covenant, a covenant sealed with Jesus’ blood. So when Jesus describes the new birth with the metaphor of water and Spirit, he means that to enter the kingdom of God it is necessary to be cleansed from one’s sins and to be empowered to live a new life, one in which one lives by the power of the Spirit. Sadly, Nicodemus still didn’t understand (3:9).

And this is the last we here from Nicodemus in this text. The dialogue ends. Jesus goes on to explain that he can speak with authority about the new birth because he is the “Son of God” who came from the Father’s side (3:13; cf. 1:14, 18). He can speak authoritatively about heavenly and earthly matters (3:12-13). He continues to describe what he must do to bring about the new birth. Jesus must be lifted up, that is, crucified if sinners, those in rebellion against God, were to be granted eternal life (3:14-15). This great discourse on the new birth ends with Jesus describing the greatness of the love of God for sinful humanity, the trajectory of those who are separated from God, and the twisted state of people’s souls. So great and abounding was God’s love that he sent his only Son to die for sinners, so that those who trusted Christ alone for salvation would experience eternal life (3:16). However, those who do not respond with belief in Jesus remain under God’s just judgment. If they do not change, they will suffer for their wickedness (3:17-18). The reason people do not come right out and respond positively to God’s great act of love is because people love the darkness rather than the light (3:19). Not only do they love sin, but they also hate the light, that is, they hate God and the things of God (3:20).

What does John 3 contribute to our understanding of discipleship? First, we have a clearer picture of what must happen for individuals to be made fit to be disciples of Jesus. There must be a change in the inner most being of a person. They must go from a state of moral and spiritual death to eternal life. Second, this change can only happen if Jesus suffers and dies first. He must give up his life so that others may experience eternal life. Third, Jesus’ act of giving himself for sinners is a display of the love of God the Father. Surely, Jesus goes to the cross out of love for his lost sheep, but here, the emphasis is placed squarely on the love of God the Father for the world. His love for his fallen creatures compels him to send his Son to pay the price for their sin against him. Finally, we are reminded that disciples of Jesus are those who believe in Jesus. It is those who believe in God’s Son that will experience eternal life.

What does all of this say about Nicodemus’ relationship to Jesus? Was he a disciple of Jesus or not? According to John 3, one has to say, no, he wasn’t. There are no indications that Nicodemus became of follower of Jesus Christ. But some will say, what about Nicodemus’ defense of Jesus and his role in the burial of Jesus? Surely they serve to indicate that he eventually became a disciple of Jesus? However, when we look at John 7:45-52 and 19:38-42 there is nothing there to indicate that Nicodemus became of follower of Jesus either. If anything, it only affirms that he wasn’t. Nicodemus doesn’t so much defend Jesus, as he defends proper judicial procedures (7:50-51). If Jesus is to be found guilty, he must first have a fair hearing. There is also nothing in 19:38-42 to affirm that Nicodemus became a disciple. Notice that only Joseph of Arimathea is called a “disciple of Jesus,” a secret one, but a disciple nonetheless (19:38). No such designation is given to Nicodemus. At best, it would seem that Nicodemus was a compassionate and fair-minded Jewish person. Perhaps, he witnessed the kangaroo court that condemned Jesus as a blasphemer. He realized that Jesus was innocent of the charges the Sanhedrin leveled against him, and as such should receive a proper burial in spite of being hung from a tree. In the end, Nicodemus does not meet any of the criteria for a disciple found in the paradigm of discipleship.

What do you have to say about the state of Nicodemus’ relationship with Jesus? Was he a disciple of Jesus or not? What evidence leads you to your conclusions?