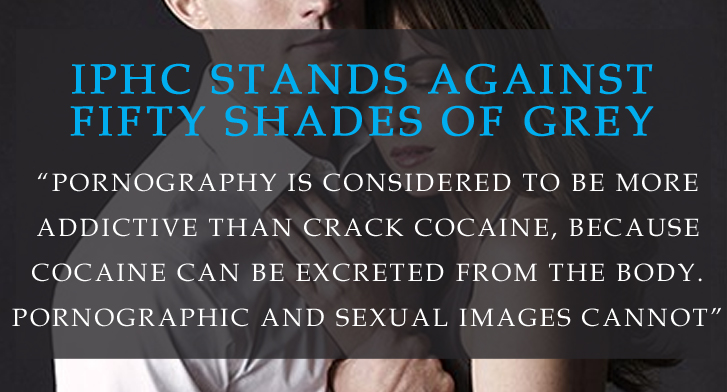 It is almost impossible to not hear about the movie Fifty Shades of Grey that is coming out this month. Based on the book series of the same name Fifty Shades seeks to romanticize a life of sadism, conveniently at the time when love and romance are traditionally celebrated.

Along with the secular hype, there are numerous articles condemning the movie. Lee Grady has an excellent article on Charisma that you can read here, Church Leaders.Com wrote an article entitled “Why Pastors Should Respond to Fifty Shades of Grey”, Fox News has an article that discusses the books and movie from the standpoint of a mother with young sons, and Christian Post gave examples of different critics who were standing against the movie’s message.

The IPHC itself has partnered with RAAP, Relligious Alliance Against Pornography, to stand against this destructive story. In the IPHC Manual our stance is clearly stated in the Covenant of Commitment which states that “We recognize the destructive and dehumanizing effects of pornography on society and oppose both its production and distribution” (page 71).

The Alliance has created a document which summarizes the movie and states their intention to “inform our constituencies about the destructive message of this movie and to highlight the beauty of God’s design for loving relationships between a husband and wife in the covenant of marriage”. The document includes a number of RAAP member signatures, including Bishop Thomas H. McGhee, Executive Director of Discipleship Ministries. You can view the document here.

While we are strongly of the opinion that Fifty Shades is harmful and degrading, we would like to suggest an alternative for those seeking a romantic movie night. Old Fashioned is an indie film produced, directed, and stared in by Rik Swartzwelder which seeks to give a completely different view of love.

“A romantic-drama, OLD FASHIONED centers on Clay Walsh, a former frat boy who gives up his reckless carousing and now runs an antique shop in a small Midwestern college town. There, he has become notorious for his lofty and outdated theories on love and romance as well as for his devout belief in God. When Amber Hewson, a free-spirited young woman with a restless soul, drifts into the area and rents the apartment above his shop, she finds herself surprisingly drawn to his strong faith and noble ideas, which are new and intriguing to her. And Clay, though he tries to fight and deny it, simply cannot resist being attracted to her spontaneous and passionate embrace of life. Ultimately, Clay must step out from behind his relational theories and Amber must overcome her own fears and deep wounds as the two of them, together, attempt the impossible: an “old-fashioned” and God-honoring courtship in contemporary America.”

In a quote from an article on Crux, Swartzwelder declares, “Clearly, we’re picking a fight with Fifty Shades because we believe it matters. Love and romance are created by God and designed to lead to marriage and physical intimacy, created by God.”

Check out the Old Fashioned website  to find a theater near you.