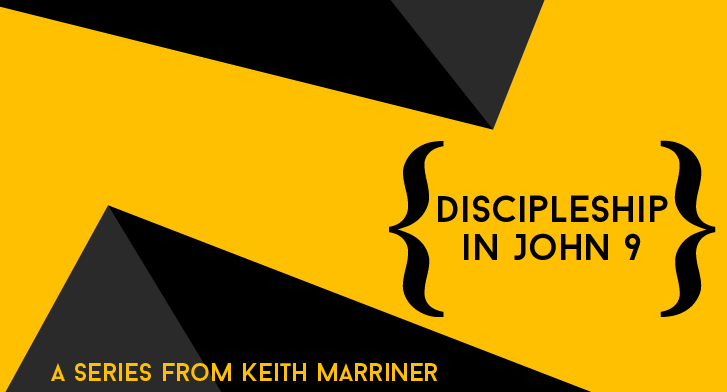 Today we continue with our look at the theme of discipleship in the Gospel of John. Here we come to the anonymous character of the man born blind in John 9. The chapter begins with a question. Jesus’ disciples see a man who has been blind from birth (John 9:1). This leads them to wonder why this man is in this condition. Did he or his parents’ sin (9:2)? This is a pretty silly question when you come to think of it. Obviously, this man’s blindness couldn’t have been the result of personal sin. He was born this way, after all. But were his parents somehow at fault? David’s child that was the result of his affair with Bathsheba dies because of his sin. So is something similar happening here in John 9?

Jesus says, no. “Neither this man nor his parents sinned … but this happened so that the work of God might be displayed in him” (9:3, emphasis added). This truth may be hard to swallow, but Jesus clearly says this man was born blind “so that” God might be seen through his life. The phrase “so that” is the translation of a short Greek word hina. In this case, hina signifies purpose. There was a purpose behind this man’s difficult life. There was a purpose behind his reliance on others for his mere, everyday existence––and it was so that God would be magnified through his life. All of this man’s struggles in life were for the singular purpose of God’s own glory being put on display.

Jesus eventually heals the man and he is able to see (9:6-7). Jesus’ healing of the man leads to several responses. Some are astonished at the sign he has performed (9:8). Others are not sure if this is the same person who previously was blind (9:9). Still others want to know more from the man about what happened and who healed him (9:10). The man provides the basics of the story to his questioners (9:11-12).

Jesus, hearing the Pharisees had expelled the man from the synagogue, went and found him and asked him, “Do you believe in the Son of Man?” (9:35) The man expresses that he does and after realizing that Jesus is the Son of Man falls at his feet in worship (9:36-38).

When we look at the man born blind, what might he teach us about discipleship? Does he affirm any of the conclusions drawn from previous narratives? First, it is interesting to see that even before expressing faith in Christ, the Pharisees identify the man as one of Jesus’ disciples (9:28). What is it that the man is doing that convinces them that he must be one of Jesus’ followers? The only thing that makes sense is that the man was bearing witness to Jesus. He was telling everyone who wanted to know that it was Jesus who had healed him and that this Jesus was “a prophet” (9:17) and man “from God” (9:33). Second, the man clearly placed faith in Jesus, not only for his physical healing, but also for his salvation from sin. The man acknowledges that Jesus is the Son of Man and worships him (9:38). Finally, we see something of the consequences for following Christ. This is something that has not been unfolded in previous narratives we’ve reviewed. We read in verse 22 that those who confess Jesus as the Messiah would be put out of the synagogue. It may be that this man was prepared to accept expulsion from the synagogue and as a result, separation from his community. The man who had been on the fringes of society his entire life was now able to reintegrate as a full member, but he traded this privilege away, so that he might follow Jesus. Jesus had become, or was becoming, his all-surpassing treasure (cf. Matt. 13:44–46). Jesus was of more worth to him than being accepted into the life of his community. Not only this, but the man was insulted and called names for his defense of Jesus Christ.

Which of these might you find yourself struggling with? The time is coming and has arrived for some in the west to endure hardships for their faithfulness in following after Jesus. Are you willing to follow Jesus even if it means people will think less of you and maybe even persecute you? Could you, like the apostles, rejoice because you have been counted worthy to suffer disgrace for the name of Jesus (Acts 5:41)?

Keith Marriner joined LifeSprings in 2009 and serves as executive editor of all IPHC Sunday school curriculum. Prior to that he served at Emmanuel College in a variety of roles, and continues to serve as an adjunct professor in the School of Christian Ministries. He received a B.A. in Christian ministries from Emmanuel College and an M.Div., a Th.M., and an Ed.D. in Christian Education from Southeastern Baptist Theological Seminary. Keith resides in Franklin Springs, GA with his wife Jennifer and their two daughters, Cora and Eleanor.