State of the Ministry- Student Ministries

A lot has changed since the last General Conference in 2013.

Since that experiment began in 2015, God has built incredible bridges—bridges between youth ministry leaders in the local church, in conference leadership, and between leaders in youth ministry from across the nation! His Spirit has brought about unity of purpose, vision, and direction through the vision of connecting and resourcing those leaders. The old temptation to do ministry solely on the island of one’s own ideas and experiences is being overcome by a Holy passion to build networks and teams! StuMin leaders from California to New England to South Florida and all points in-between have discovered common bonds, and shared visions.

Beyond just bridges, He has also opened doors to reach weary and broken leaders through those relationships built in spite of geography. Ministry-weary professionals and StuMin volunteers who have been pouring their hearts and souls into this next generation alike are finding encouragement in one another, they’re finding strength in numbers, and they’re finding relationship within the grander narrative of HIStory. He has inspired resources to be developed and distributed to people on the front-lines of ministry. Knowledge is given, experiences are shared, stories of life transformation are being told in relationships that might never have otherwise developed apart from His hand.

He has shown us new tools to operate in our current culture through extensive training and practical experience in the trenches of youth ministry. The passion to create teams and built networks has allowed wisdom to prevail where ignorance might have overcome—congregations and youth ministry leaders are choosing to be a part of a larger movement instead of choosing to walk alone. In that wisdom, His Spirit has turned hearts and changed minds about how we view one another in ministry–that ministry leaders remember their roles as servants first, and that the local church is the place where ministry begins and ends.
Most significantly, He has visited His people. In crowds of thousands of teenagers at Accelerant and YouthQuest, He has miraculously healed students of physical problems! Throughout conference youth camps all over the nation, He has purposefully called teenagers into the work of the Kingdom—our next generation of ministers! Through TalentQuest and YouthQuest, God has equipped young people with extraordinary gifts to reach the lost. Through BibleQuest, He has inspired the next generation through the study of His Word.

Now to Him who is able to do far more abundantly beyond all that we ask or think, according to the power that works within us, 21 to Him be the glory in the church and in Christ Jesus to all generations forever and ever. Amen. 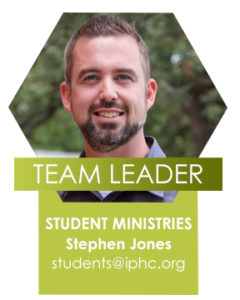