The following story, written by a Children's Center physician, demonstrates the miraculous events taking place every day at this marvelous hospital. We are proud to share it with you.

I was thinking a few weeks ago about all the children who are patients here at the Children's Center; not about what they have or what they can or cannot do, but about who they are. Some are easy-going and happy wherever they go, while some still have a toddler streak and like to know the plan well in advance. Some play along; some make the rules.  Beyond that, I was thinking who celebrates their victories, big and small, and remembers every single one? What hopes for the future surround them, day and night? I was driving to work one morning when that little voice inside my head (or perhaps a big voice well outside of my head) said, “Tell the stories.” I got the feeling I sometimes get when I know I have just been given the right answer, a light unto my path.  So here they are: the stories behind the patients we love. 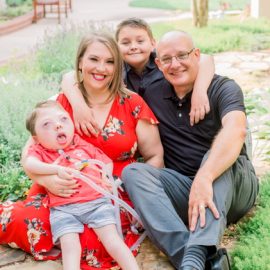 Cohen’s parents, Kim and Kyle, had a 5-year old son, Carson, when they learned they were having another son. They had struggled with infertility for five long years, so Cohen was a miracle from the start. The pregnancy went well until 33 weeks when she noticed the baby wasn’t moving one day. She went to her obstetrician, not knowing what to expect. They quickly found a heartbeat, but she was right—he wasn’t moving. The plan they had in mind took a sharp right turn when the doctor told her they were going to induce delivery as soon as possible.

Cohen was born without a cry, quickly whisked away and soon connected to many machines. He was alive, but he wasn’t moving like he should be. He wasn’t breathing on his own. The neonatal intensive care unit (NICU) broke the news to his parents that an electroencephalogram (EEG) showed no brain activity. He wasn’t going to make it. So many thoughts rose up to meet them, tumbling options of which emotion would take the reins. But on the second day, “God gave me peace,” Kim said, “I had to accept this is God’s plan for our life. We needed to love him for those days we had him.”  The hardest part for her was telling Carson, who was so excited to have a brother, that Cohen was going to live with Jesus.  She wanted Carson to have time and space to process this, even as things moved quickly around them.

They planned to stop life support, hoping to donate his organs and turn his short life into a gift for others. She remembers with a distant smile telling her husband that morning to wear a shirt he never wanted to wear again because she wouldn’t be able to see him in it any other day. But suddenly, something changed. Cohen began to breathe over the ventilator, meaning he was taking his own breaths for the first time. They waited a little longer to see what would happen, and slowly but surely, he started to improve. His vital signs stabilized. His labs improved. The EEG was repeated…and it was normal. Normal. His brain imaging was normal, too. So, they held on for another sharp turn, waiting to see where he’d take them next.

Specialist after specialist stood at Cohen’s bedside and told them with reassurance and satisfaction that from their point of view, they couldn’t find anything wrong. But Cohen continued to have difficulty on the ventilator, continued to have minimal movement, continued to have complications, and no one could tell them why. Each time another specialist was crossed off the list, it left more questions that had no answers. The geneticist thought he might have non-ketotic hyperketonuria (NKH), a metabolic disorder with a complicated and progressive course, but the test was negative. All the tests were “normal” but that word held little comfort. Was it better to hear bad news just so they could read about it, or better to have no book to guide them? One NICU resident was especially dedicated to Cohen and his parents. “Dr. Kristin Lewis was a blessing to us. She helped us through so many ups and downs.”

Cohen was discharged home from the NICU at 12 weeks old with a tracheostomy, oxygen, and gastrostomy tube feedings. Mom admits they were overwhelmed. His care took a lot of time, and meanwhile they were dealing with their acceptance of this new way of life while guiding Carson through his own rollercoaster of understanding and grief. “He wanted a brother he could play with,” she recalls. Helping him through that disappointment was very difficult. They continued to rely on their faith in God. Kim still felt a sense of peace that God was with them, that he would carry them through it all, holding onto the hope that, “This is God’s plan. It has a purpose.”

Soon after arriving home, Cohen’s path took another unexpected turn. He had more respiratory secretions one day and developed a tracheostomy plug at home. This is when mucus blocks the airway opening and causes severe respiratory difficulty. He was rushed to The Children’s Hospital at OU Medicine, where he was admitted to the pediatric intensive care unit and diagnosed with parainfluenza, a virus that causes croup. He had a difficult six-week course, and it became clear he would not be weaned off the ventilator this time.

Someone then mentioned The Children’s Center Rehabilitation Hospital in Bethany. It seemed like a new option existed where the prior multiple-choice question only listed A) take him home or B) don’t.  Like it or not, his new companion was a ventilator, and even having a secret option C felt like a gift at times. Cohen was transferred to The Children’s Center Rehabilitation Hospital at four months old. Kim says it was extremely hard to leave him, especially that first night. Leaving him without family by his side was another big step in the walk of raising Cohen. She spent hours and hours at his bedside, “Cohen’s bedspace here is a peaceful place. I feel the Holy Spirit when I am there.” The first months weren’t easy for Cohen. He had difficulties with ventilation, infections, and recurring prolonged seizures. “Dr. Kaustubh Sagdeo was another person who helped us through that transition. He would come to Cohen’s bed and just start talking to him, telling him about Oklahoma City Thunder games, just like any other child. We needed that.”

The Children’s Center became Cohen’s home. One the family loves and appreciates. “This place gives them life,” she says, “They get to do life.” She is amazed at the opportunities Cohen has had, experiencing the world in his own way. “People don’t realize how much he knows what’s going on. He doesn’t move very much, and he can’t smile, but he loves music, movies, and playing in water. When I walk into his bedspace he hears my voice, and he begins to ‘wiggle’ in this funny way he has. I know he knows that mom is here.” Someday, she hopes she’ll see him smile, but the way he responds to her voice is enough for now. Kyle and Carson visit often as well, and they occasionally take him home for a short visit with family. When asked what hopes and goals she has for Cohen, she says they hope to do more therapeutic leave visits home with him. It is a special time for the family when he is there, and all four of them can relax in the family room together.

Kim sums it up perfectly: “I am madly in love with my child,” she says. “We are blessed to know he is safe, he is cared for, and he has many experiences here. I want him to be comfortable and feel loved during the time we have with him. I also want him to be free, and my faith helps me know he will be free. Someday he will dance and play like other children.” 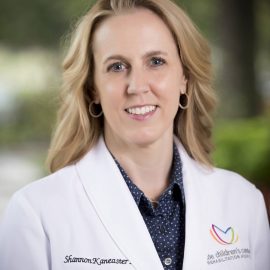 About the Author: Shannon L. Kaneaster, MD, is a pediatric hospitalist at The Children’s Center Rehabilitation Hospital. Dr. Kaneaster earned her undergraduate degree in biology from Southwestern University in Georgetown, Texas,  and a medical degree from Texas A&M University College of Medicine. Following the completion of her medical degree, Dr. Kaneaster completed a pediatric residency as chief pediatric resident at The Children’s Hospital at OU Medical Center.