Pastors to Chaplains in the Ukraine

On Sunday November 1st, 2015, Chaplain Roger Heath, Chaplain Philip Chandler, Chaplain Lou and Becky Shirey, and Chaplain Jerry and Cynthia Jones met in Oklahoma City for prayer and final planning.  Their mission; go to Kiev, Ukraine, meet with civilian pastors and their spouses, and minister to and train them on providing pastoral care and religious support to the Ukrainian Soldiers on the war front.

So began the journey of a lifetime for this team. After three months of planning and coordinating, sending briefing slides and having them translated by Anya Goliakova (the main interpreter for the team), we arrived in Kiev on the following Tuesday where we were met with outstretched arms in appreciation for going there.  The ministry and training began on Thursday and concluded on Saturday with about fifteen civilian pastors and five spouses in attendance.

The Ukrainian Army does not have imbedded chaplains like the U.S. Army. Neither does the Ukrainian Army or government provide equipment, uniforms or compensation.  These selfless civilian pastors go where the Ukrainian Soldiers are, on the war front, to take pastoral care and the Gospel.  But they aren’t trained either.  Knowing the training U.S. Army Chaplains have, Bishop Valery Reshetinsky and his associate Valery Alymov, through World Missions, requested the IPHC send a team of chaplains to Kiev to share their ministry and expertise.

Each day began with dynamic and spiritually uplifting devotions and singing led Valery Alymov. Each day as the team shared their testimonies, briefings, and experience, the hunger in the hearts of the attendees for more professional development became more evident.  Each day the struggles they experienced in providing pastoral care due to loss of life, separation from family, and hardship on the battle field began to surface.  All of this led the team to understand that ministry to the pastors and spouses was just as important as the training.

The training culminated with a Communion service. It was during this time it became evident, that although we spoke different languages, the Holy Spirit crosses the language barrier and makes Himself real and present in the hearts of believers.

On the following Sunday, the team attended Christian Hope, IPHC, in Kiev. Although the Ukraine does not have a Thanksgiving holiday as the U.S., the church celebrated a Thanksgiving Sunday.  The service lasted four hours!  It was a privilege for each U.S. Chaplain to speak on ‘Being Thankful’ for a few minutes during the service.  It was also a tremendous opportunity to connect and network with an IPHC sister church in another part of the world demonstrating the importance and relevancy of working together for the spread of the Gospel.

Now the IPHC has two challenges. The first is; the IPHC leadership in the Ukraine wants the team to come back.  And of course the team wants to go back.  But it is costly to do so.  If you feel led, please contribute to IPHC Chaplain Ministries.

Second; the civilian pastors need body armor to wear to the war front. The cost is $400.00 per set for a flack jacket and helmet.  This is a critical need.  If you feel led to contribute to this project, please give to the Pastors to Chaplains Body Armor.  Thank you for your support.

Bishop Chris Thompson, Executive Director of EVUSA, is thrilled that Chaplains Ministries could come along side of World Missions, Bishop Talmadge Gardner, and Regional Director Bob Cave. We are certainly better together. 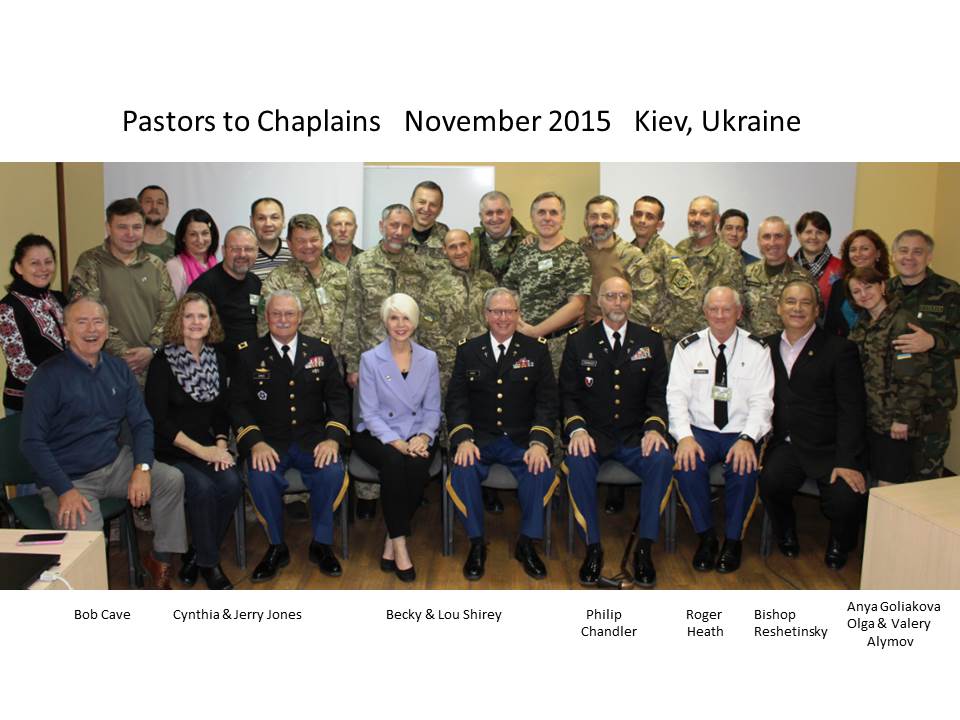