Why would men, including a 73-year-old, spend money to purchase a brand new pickup and spend twelve days following the five men on the motorcycles?

Was it done because they “love” riding motorcycles to extreme limits? Was it done to prove they could endure to validate their manhood?

First, it was our original desire to see the IPHC family know across this land we had an alternative to abortion, Royal Home Ministries aka RHM in Falcon, NC. In our travels, we learned there were many who had no idea such a place existed. Our desire was to activate the “whole” of the church family in supporting and sending young women to this wonderful place. 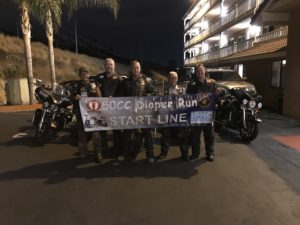 Secondly, we wanted the world to know  that Christians were not all about protest (which can be misread). We wanted to help, not condemn. Sure, we oppose sex outside of marriage for all the right reasons but life happens, even to the best of families (whatever that means). So, if it happens, we are quick to help reconcile and support the one who feels there is no way out. The IBA (Iron Butt Association) sanctions our ride; please see the attached picture. I will repeat the quotation written by them, “50cc Diaper Run Coast to Coast in less than 50 Hours while collecting diapers and raising awareness for the Royal Home Ministries and IPHC’s commitment to LIFE”. Please acknowledge the fact this is a secular organization recognizing our efforts for life and support to the world! 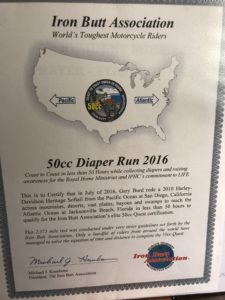 Third, our approach was to help the young lady (later we learned there were men who deal with this sin later in life) not make a choice that would lead to a lifetime of regret. We wanted to save them from the ugly memories.

Fourth, we wanted to save the baby’s life. We asked ourselves, have we aborted the baby that would grow up and find the cure for cancer? The drug problem? Two young men, one 35, the other 41 years old, who have each wanted a family of their own, rode to make a statement of life motivated by their pain and the experiences they’ve endured. 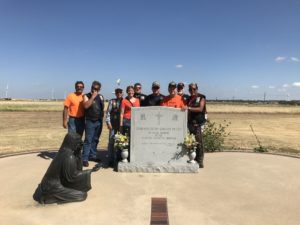 This year we rode in the “Missing Man Formation” in memory of the 59+ million babies aborted since Roe v. Wade in 1973. The “Missing Man Formation” has two bikes in the front, two bikes in the back and one bike in between. The slot where the sixth rider would be, was left open. We all rotated throughout the ride so each one could experience the pain of looking to his right and not seeing a rider, remembering the babies that could have been there.

Lastly, it became a real revelation this year that abortion is “a defiance of” or “a reproach to” our God. The Bible tells us, we were known before the foundations of the world and that the Lord is involved in our development in the womb. When a baby is aborted, we are screaming at our God and saying He made a mistake. We do not know the ways and thoughts of God inclusively, we do not know how a child conceived out of wedlock works in the order of God, BUT WE CAN BE SURE OF THIS ONE THING, HE KNEW THE BABY WOULD BE CONCEIVED AND HE HAS A PLAN FOR THAT BABY JUST AS MUCH AS HE DOES ANY OTHER BABY.

This year, the hurricanes wrecked havoc on our route:

It has been a standard of M25 to not elevate one minister or ministry over another. A $100 offering maybe as sacrificial as a donation of $1000, therefore, let us thank God for the ten stops and the sacrifice of the ministries that made it happen. Our ride would mean nothing without you. 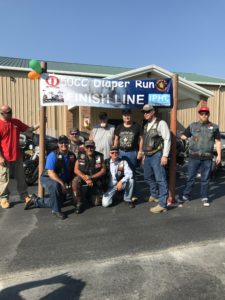