In Memory of T. Ralph Davis

Seldom does one find a pastor who is as comfortable in the church kitchen as in the pulpit. Most would prefer a dress suit to an apron. 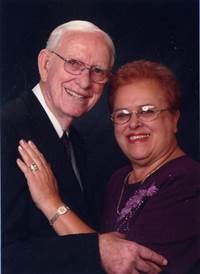 That, however, was not the case with the Rev. T. Ralph Davis. Throughout his life and ministry, Brother Ralph maintained a healthy balance between providing nourishment for the spirit and the body. This characteristic became obvious early in his life. His mother often remarked that Ralph was the one who could be found helping her in the kitchen as she prepared meals for her large family.

Theodore Ralph Davis was one of five children (two girls and three boys) born to Lafe and Ela (Beam) Davis. He was born on August 2, 1928, in Norge, Oklahoma, and went to be with the Lord on January 28, 2017, in Cyril, Oklahoma.

Ralph was born again at age 17 at the Cyril Assembly of God. He graduated from Cyril High School in 1946 and later attended Southwestern Bible College (now Southwestern Christian University).

He served in the United States Army during the Korean War from October 1950 to December 1952.  He went to work for Civil Service, Fort Sill, as a clerk in January 1953 and later promoted to a Manpower Management Analyst.  He married LaVeta Darrah on November 9, 1956, at Lookeba, Oklahoma.

Ralph joined the Cyril Pentecostal Holiness Church in 1950 and served several years as the pianist, youth director, Sunday School teacher and Sunday School secretary and treasurer.  Before entering the ministry, Ralph served eight years as Assistant Director of the Conference Youth Department.  During this time, he edited a Conference Youth Newsletter which was published monthly.

In 1966, he felt his call into ministry and was later licensed and ordained in the Pentecostal Holiness Church.  He pastored churches at Mountain View, Kingfisher, McLoud, Apache, Hinton, and Anadarko.  He was elected to serve the Conference as secretary and treasurer for 12 years.  In 1987 he was elected as Conference Superintendent and served for 6 years.  While serving as Conference Superintendent he served on the General Board of Administration of the International Pentecostal Holiness Church.  He also served on the Board of the Oklahoma Christian University and the Carmen Home for the Aged.  During his ministry he attended Cameron University in Lawton and the Oklahoma Christian University in Oklahoma City.  While serving as Conference Superintendent he moved back to Cyril.  While pastoring the Anadarko Church, he took a part-time job at the Cyril Funeral Home.  Ralph retired from pastoring in 1998 and was later involved in Calvary Temple Outreach Ministries, serving as Associate Pastor, song leader, church treasurer and in charge of the Lighthouse Coffee House Ministries.  On October 27, 2012, he was honored with the Lifetime Achievement Award from the Heartland Conference, IPHC.  In 2016 he received his 50-year pin as an ordained minister of IPHC.

Ralph loved oil painting, gospel singing and wrote several poems and songs with music.  He enjoyed playing the piano, guitar, and mandolin and was the author of one book, “I Remember When” which is a history of the West Oklahoma Conference of the Pentecostal Holiness Church.