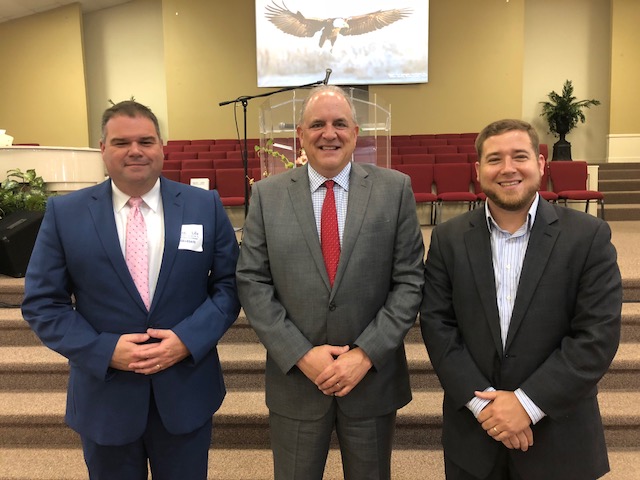 The IPHC Core Value presentation of “All Generations” was well received by the delegates. Following that presentation, Rev. Scott Lollis gave the Decorum Committee Report.

Bishop Ray Boggs presented the State of the Conference Report. At the close of 2017, the conference had 91 congregations with a total congregational membership of 38,343. Conference clergy included 218 ordained ministers, 81 licensed ministers, and 34 local church ministers. Bishop Boggs announced that Rev. Chris Thompson, president of Holmes Bible College, had officially transferred as a seconded minister from the North Carolina Conference since he was pastor of the Holmes Memorial Church, an affiliate member of Spirit Life Ministries.

Bishop Boggs described how the conference was actively supporting the Turbeville Children’s Home. The Amick Grove PHC built a new picnic shelter and bought new bedding for the children.

The conference is working with Rev. Josh Hannah and EVUSA with 22 senior pastors involved in church revitalization. The Hispanic ministry of the conference continues to grow under the leadership of Pastor Eder Herrera. Last year at the Saturday morning Hispanic service at camp meeting, over 250 were in attendance.

Bishop Boggs spoke of the conference’s commitment to Arise 2033 and the goals for planting new churches. Over the next four years, the conference has a goal of starting a minimum of 20 new congregations.

Following the State of the Conference, Rev. Brent Lollis presented the Bylaws Committee Report. When the section addressing elections was completed, the conference by unanimous vote affirmed the nominations of Bishop Ray Boggs for another term, Rev. Brent Lollis as assistant superintendent, and Rev. Joshua Bridges as secretary-treasurer. The other members of the council will be appointed by these three.

The Credentials Report included the following:

There was a good spirit in the conference. There is an excitement about growth and reaching the lost for Christ.