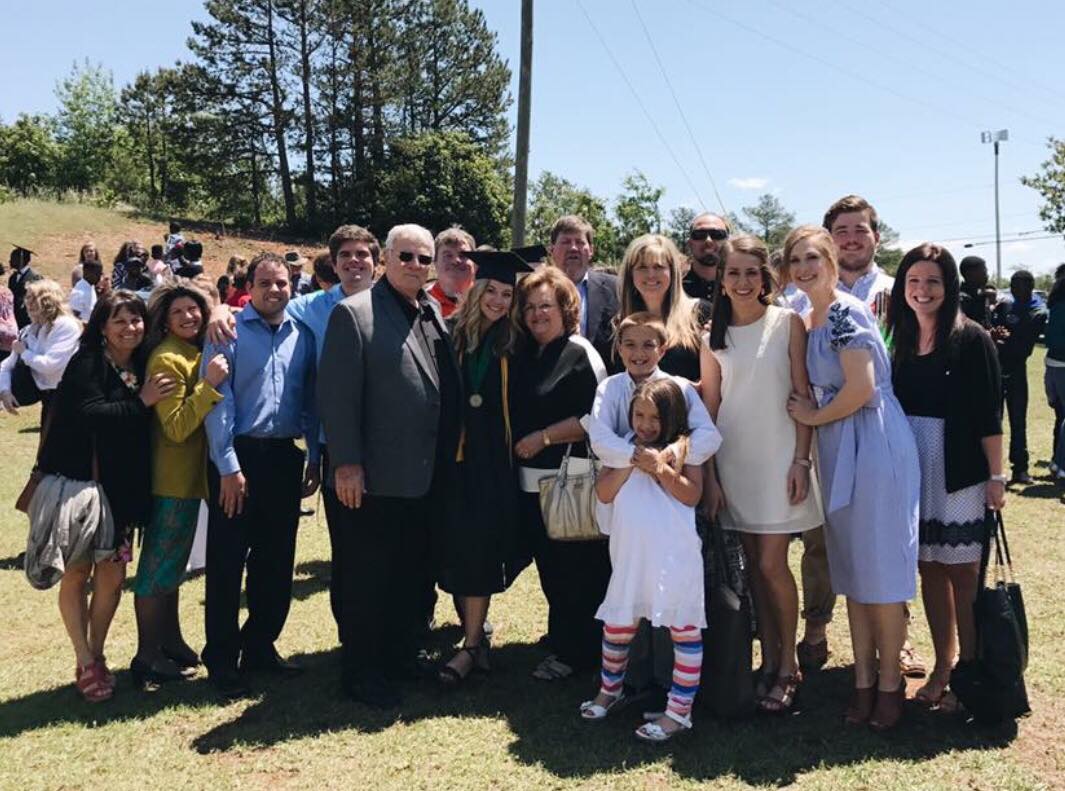 Audra Williams Smith and her family at the graduation of Carolyne Smith from Emmanuel College.

From a gator wrestler to church planter, this is the story of my grandparents and the IPHC since the early 1900s. Looking back at the generations before me, I can remember the stories of how they prayed and sought God’s plan and when God spoke, they moved. Their willingness to obey the Lord and to do what God had called them to do has continued to this day and led to many opportunities for future generations in our family. I have witnessed three characteristics in the generations before me: faith, obedience, and love.

The first attribute is faith. Hebrews 11 says over and over that “by faith” our forefathers moved and this is our mandate–to move by faith. My mother’s parents and their family helped plant one of the oldest churches in the state of Florida. My grandparents served in many areas in that church and because they stepped out by faith, what was birthed continues today.

The second attribute that I have seen in past generations is obedience. Hebrews 11 says Enoch pleased God, Noah prepared an ark, Abraham obeyed, and Sarah received strength to conceive. My dad’s father, Rev. J.J. (Martha) Williams (or “Gator Joe” as he was called), was a gator wrestler who loved the outdoors. Then the Lord radically saved him, filled him with the Holy Spirit, and he served in the Florida Conference for many years. He was a pastor in Tallahassee in the 50s and saw a mighty move of God that brought a transformational revival which birthed pastors, worship leaders, and church leaders who are still serving in leadership today, along with the next generations of their families. He served as a pastor in Tallahassee, Jacksonville, and Orlando until he retired and then traveled as an evangelist throughout Florida.

My Grandparents also had a special love for Israel. They first visited in 1967 and my family continues to go, serve, pray, and bless the land. We were just there for the historic embassy opening in May. My grandmother also loved Women’s Ministries and from the time I was about 3 years old she took me with her to every camp meeting as well as each quadrennial convention; I know that is why I am still serving in Women’s Ministries. My grandparents inspired me because of their radical, faithful obedience to believe God for the impossible and witness following generations fulfill their destiny.

The third attribute is love. The book of Hebrews talks about mighty men and women who walked by faith. Although they were not perfect, they knew the love of God and knew that when God spoke, He would do what He had promised. My parents followed in the footsteps of my dad’s parents and left their secular business to become the next pastors of the Orlando International Worship Center, where they are serving today. They walked away from job security and retirement to answer God’s call and have now served for over 31 years. God’s love can be seen in the time they have served as pastors– the dead have been raised, breast cancer has been healed, and the next generation of spiritual sons and daughters have been raised up to change the world. Their leadership, compassion, and love for people have changed the hearts and destiny of many people.

Hebrews 11:8-9 says, “By faith Abraham obeyed when he was called to go out to the place which he would receive as an inheritance. And he went out, not knowing where he was going. By faith he dwelt in the land of promise as in a foreign country, dwelling in tents with Isaac and Jacob, the heirs with him of the same promise.” The promise that my grandparents and parents experienced is available to my generation and future generations, as well. God’s promises are for every family that will be obedient and have faith. I claim this faith, obedience, and love over the future generations and pray that they would be the church planters, worship leaders, pastors, and evangelists that God has called them to be.

My husband and I are very blessed to have our daughter, Carolyne, currently serving as a short-term missionary in Budapest, Hungary, for The Awakening International Base. Our son, Jordan, is a sophomore at Emmanuel College and they both are the fourth generation to continue the inheritance. Be encouraged today that God will use you to reach all generations if you only have faith and believe.