One of My Heroes from the Past Generation

After graduating from college, I attended graduate school at Union Theological Seminary (UTS) in Richmond, Virginia (now called Union Presbyterian Seminary). Though I was accepted at other seminaries, Union’s strong Bible department and financial aid, along with an excellent local IPHC church, led me there. The Presbyterian money must have been predestined to educate a Pentecostal Wesleyan Arminian!

In the chapel services, I heard and learned new hymns, such as “For All the Saints.” I always have that hymn in my mind when I attend a funeral service. I’ve been blessed to know personally many of the “saints” whom the Holy Spirit used to affect the IPHC since the 1950s. If I started naming them, it would be like reading 1 Chronicles 1–9. They were mighty women and men in the IPHC family.

In July of this year, I learned that one of those saints, Lawrence A. Pfaff, joined his late wife with the Lord. Born in Pennsylvania on St. Valentine’s Day 1929, Pfaff attended Holmes Bible College (where he met his wife, Lola Rankin), Furman University, and then obtained a master’s degree from William and Mary.

I first heard the Pfaff name in the early 1970s as he had pastored in the Eastern Virginia Conference and had responded to the mission’s call. They began serving in White River, South Africa, along with their three daughters (Etheyln, Barbie, and Cheryl).

Later that decade the Pfaff’s brought their youngest daughter Cheryl to Emmanuel College where I met this amazing family. When they visited Emmanuel, I was always impressed by the Pfaff’s gracious and friendly demeanor.

I remember Cheryl remarking that her father was often in Nigeria, but her mother was in the USA helping with fundraising and the family. At times he would return to the USA to be with his family and raise funds. I didn’t realize when they would visit that I was in the presence of such humble and faithful servants of Christ in the IPHC in West Africa.

It wasn’t until I became World Missions Director that I began to understand the Pfaff’s significant impact in West Africa. I knew the IPHC had a Bible school in Lagos but knew little of its history. While IPHC missionary Johnny Brooks had started the IPHC work in West Africa in 1955, and a small school in 1957, the school had closed in the 1970s.

However, Lawrence Pfaff came to Nigeria and began a new dream that continues to this day. Initially traveling across Nigeria, he journeyed westward into Benin to encourage the IPHC presence in that nation. But it was in Lagos that Pfaff found the opportunity to establish a strong IPHC Bible College.

IPHC missionary Willard Wagner told me, “Rev. Pfaff and his wife almost singlehandedly raised all the funds for the purchase of the land, and the construction of the facility, where the present Bible College is permanently established.” That property is a short distance from the Gulf of Guinea and when it is quiet, one can sit on the school roof and hear the ocean.

It was a major project. Pfaff lived among the Nigerians whom he served, once living with nineteen Nigerians in the same house! He later slept in the unfinished rooms of the college.
At one point an IPHC Nigerian family opened their home to him and provided better shelter and food. He hired Italian contractors to build the outstanding facility. He was responsible for hiring Dr. Luke Nnadi as the head of the West Africa Bible College, a position Dr. Nnadi holds today as well as the IPHC Nigeria national leader.

Today this property is valued at over $1 million U.S. dollars. Lawrence Pfaff saw an opportunity that others did not see, and his faith and work continues. The WABC has trained nearly 3,000 men and women who are serving Christ and the IPHC around the globe.

In November 2007, Willard Wagner invited Brother Pfaff to return to Lagos for the dedication of the new conference center named in memory of his beloved wife Lola Pfaff. This needed facility was made possible by funds raised through World Missions, the Pfaff family, and Willard and Yvonne Wagner. Traveling with Lawrence were two grandsons, David Peyton (son of Ethelyn) and Karl Stefan (son of Barbie). I was honored to join the Wagner’s and Pfaff family for this special event. 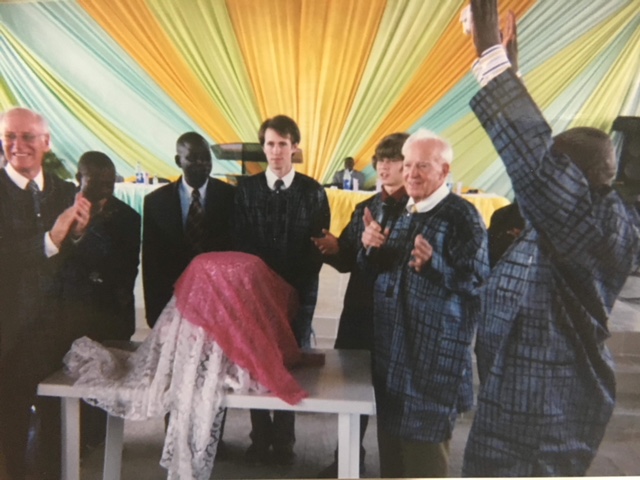 A ‘never-retiring missionary’: Lawrence Pfaff at the Bible college in Nigeria in 2007.

Lawrence Pfaff was then 78 years old but full of energy and enthusiasm. I kept some notes about that trip and wrote about his preaching, “He (Pfaff) spoke from Psalm 92:12 on the palm tree and did a great job. He’s a very good teacher and repeatedly had us quote the passage! His applications were great also.”

The West Africa Bible College graduation was on Saturday, November 17. There were over two thousand people present and Lawrence, his grandsons, the Wagners, and I were on the platform. At one point in the praise music, hundreds of Nigerians entered the aisles and front area to dance. I could tell that Lawrence was loving it.

He leaned over to me and said, “You can do that, go on out there.” I replied, “I’ll go if you go.” He stood up and together we joined the dancers and spent the next fifteen minutes with the Nigerians in praise to the Lord.

When we returned to our seats, his grandson David was sitting next to me. I turned to him and said, “Your Granddad is the happiest man on earth!” I saw with my own eyes why Lawrence was called the “never re-tiring missionary.”

Our core value emphasis this year is “We Prayerfully Value All Generations.” Lawrence and Lola Pfaff are part of a generation that is joining that “great clouds of witnesses” we read about in Hebrews 12:1. But their testimony continues to inspire us.

This article was published in the October 2018 issue of Encourage.