“Welcome!” Children’s pastor Angie Burroughs stands with several other members next to the gravel drive, directing traffic. “And this little fella has something for you.” A blonde boy about 6 years old hands us two souvenir pens bearing the church’s name, and we drove down into a grassy bowl. Bishop Beacham has been invited to take part in Buena Vista Pentecostal Holiness Church’s homecoming and centennial celebration, the latest of a number of IPHC churches to celebrate 100 years of faithful ministry.

The property where the service will take place, purchased under former pastor W.A. Mills’s leadership, lies on a hilltop above the town of Buena Vista. (Locals pronounce it “byou-nah.”) At the center of the natural amphitheater, a low hill rises, crowned by a metal-framed pavilion. “Just installed it yesterday,” lead pastor Adam Williams tells me later. The structure provides the musicians and speakers with some shade from the mid- morning sun. Above a semi-circle of chairs stand three wooden crosses, their outlines sharp against the backdrop of the Blue Ridge Mountains and the bluer sky. Before today, the church has used the property for special community events. Behind the pavilion, a simple but sturdy shed-like structure is all that remains of the live nativity at Christmas’s Night of Miracles. 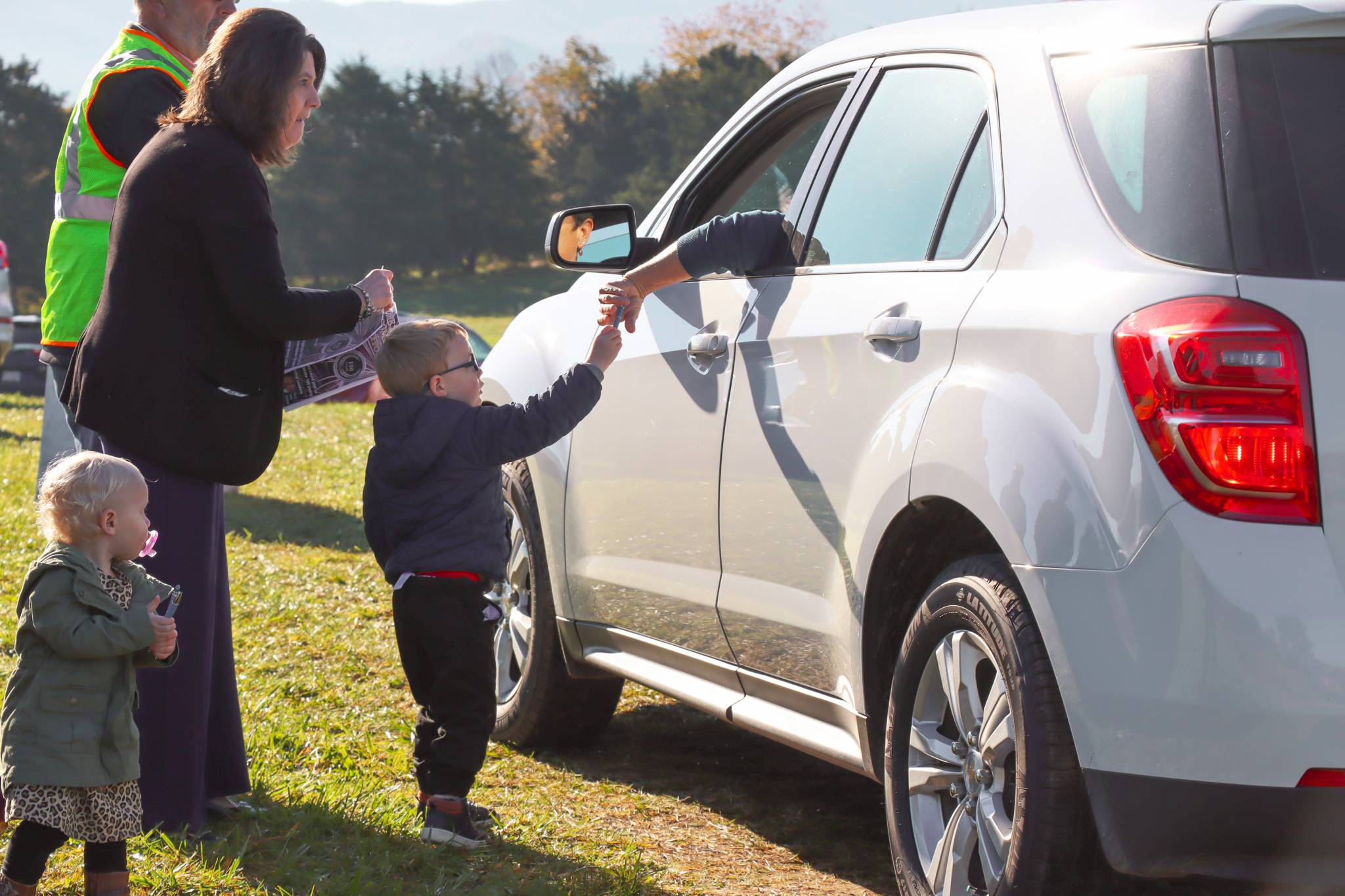 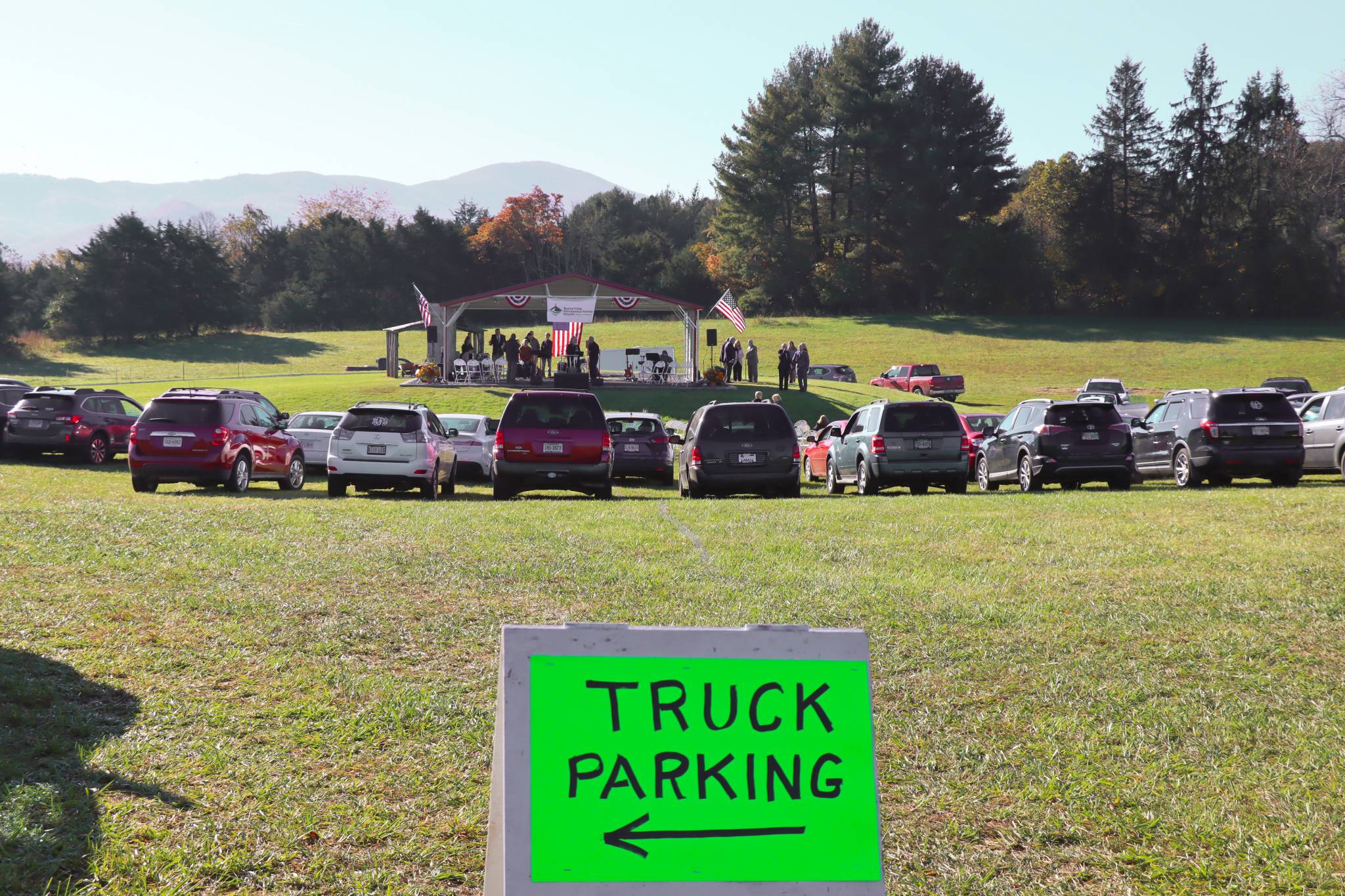 Bishop Beacham heads toward the pavilion, where a three-generation family quartet led by former youth and worship minister Billy Griffin rehearses its special music for the service.

Griffin, who served Buena Vista for many years, will join several other former ministers in this celebration service. Appalachian Conference Superintendent Preston Mathena began his pastoral career here as a youth pastor. Tim and Kathy Morrison were fine arts director and church secretary, respectively. And David Bain, now 89 and pastor emeritus, served as Buena Vista’s pastor for more than two decades. Only W. A. Mills, the most recent former pastor who now serves the IPHC as Men’s Ministries director, is absent due to illness.

As Bishop Beacham greets Pastor Williams and Bishop Mathena, more church members arrive. Some settle into the white chairs arranged in front of the pavilion. The service will be broadcast on an FM radio station, so a number of attendees remain in their vehicles. The church has become accustomed to a drive-in service during the last seven months, rediscovering the method as other churches have during the COVID-19 pandemic. 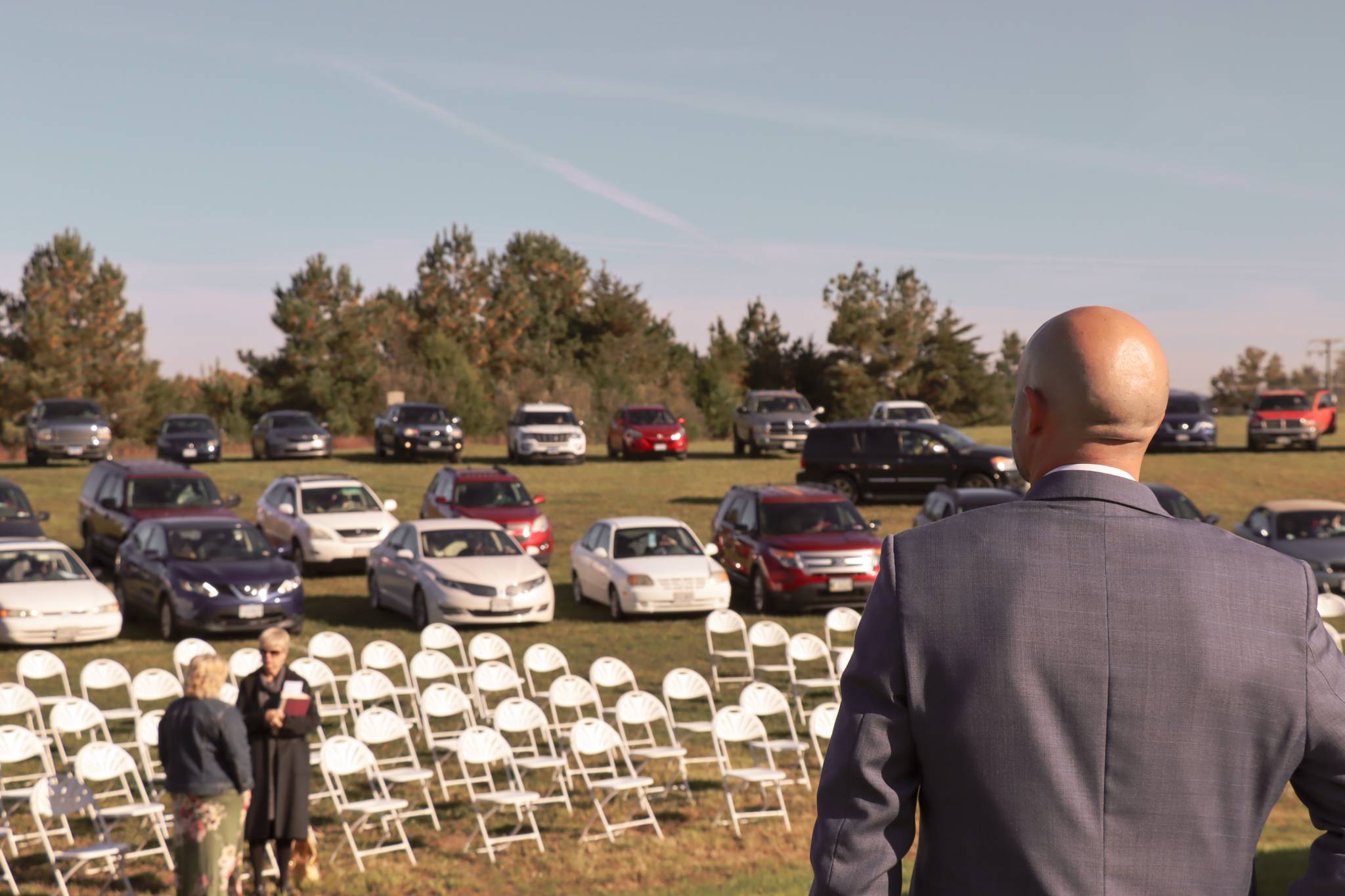 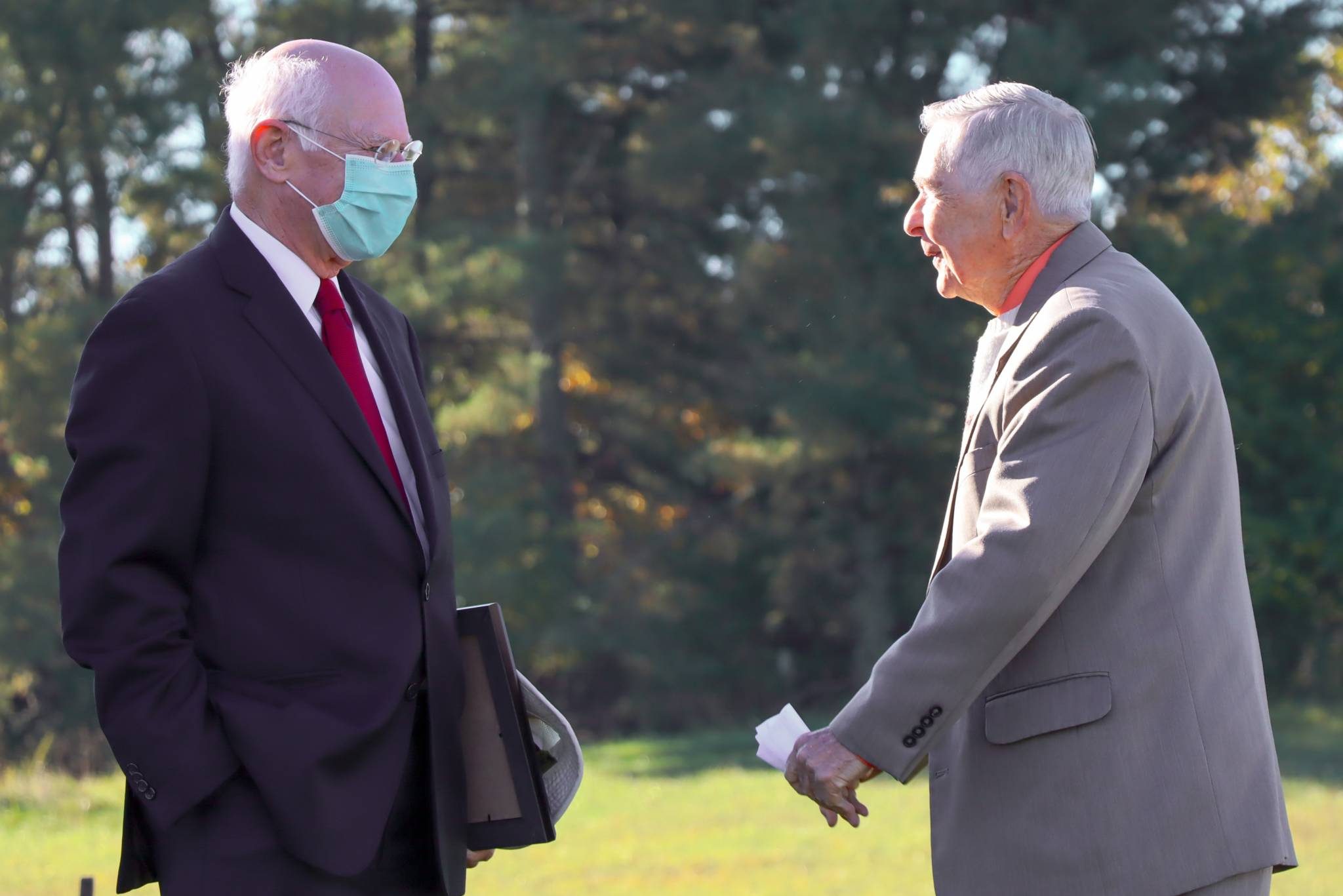 The service begins with music, and worship leader Roger West calls the people to worship from Psalm 78:1-7. He emphasizes verse 4: “We will not hide them from our children, telling to the generation to come the praises of the Lord, and His strength and His wonderful works that He has done.” He raises a hand, his finger pointing at the church’s name on a banner above him. “We are declaring the works of God to future generations today,” he says, and honking horns join the shouted amens.

Pastor Williams then introduces the city’s vice-mayor, Lisa Clark, who is a member of BVPHC. Her presentation includes a greeting from the city council, as well as a formal proclamation celebrating the church’s anniversary. The proclamation recounts the church's history, beginning with a tent revival conducted by G.W. Stanley in the fall of 1920. 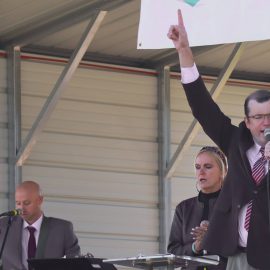 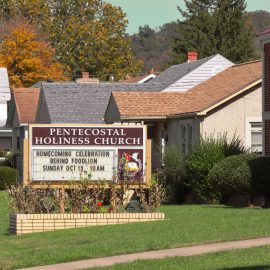 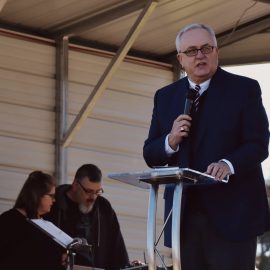 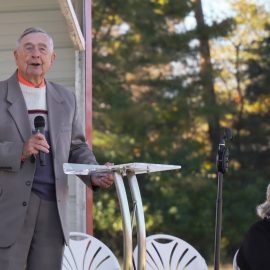 Bishop Mathena speaks next, greeting the church on behalf from the Appalachian Conference. The celebration is about more than a hundred years of existence, Mathena says; “We’re celebrating a hundred years of faithful ministry.” He lists the many ministries of the church, including discipleship and missions, encouragement and prophetic speech in the community. Ultimately, he says, those gathered are celebrating “a hundred years of testimony of God’s faithfulness…week after week after week.” But he ends with a challenge to celebrate the past as fuel and energy for future strategy. “Yesterday’s home runs do not win tomorrow’s games,” he says, a quote attributed to Babe Ruth.

After special music from the Griffin family, Pastor Adam Williams introduces Pastor Emeritus David Bain, who began ministry in Buena Vista in 1969. He would remain for 27 years. His ministry there, he says, changed his life. Despite disappointments and challenges, Bain remembers God’s regular encouragement through the miracles of lives changed and the church’s ministry expanded and increased. Despite his retirement, Bain’s own ministry continues in the area – in his introduction Pastor Williams calls him the “pastor of Rockbridge County.”

Bishop Beacham follows Tim and Kathy Morrison’s special music. He presents Pastor Williams with a certificate commemorating the church’s anniversary, as well as a copy of Remembering for the Future, his recently published commentary on the IPHC’s Centennial Covenant. After reading from Matthew 5:13-16, he leads the congregation in imagining the Buena Vista of 1920, living and working in wake of the First World War and the Spanish Flu of 1917-20, when G.W. Stanley brought his tent to town. 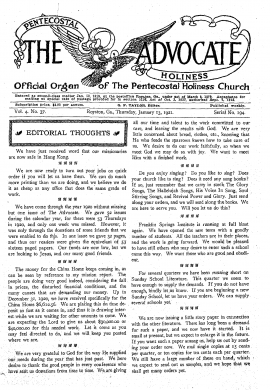 Buena Vista PHC’s long effectiveness might have something to do with the prayerfulness and zeal of their hard-working founding preacher, G.W. Stanley.

Stanley reported on the tent revival and its subsequent work in the January 13, 1921, issue of the Pentecostal Holiness Advocate (page 1, page 2): “The first ten or fifteen days I had awful opposition. It looked like it was going to be a failure…The Lord told me to hold on and He would bless. I soon had more than my tent would seat.”

Rev. Stanley bought a lot for $125 and built a 32x50 church building. After seven weeks of ministry, as well as numerous conversions, testimonies of sanctification and water and Spirit baptisms, he formally organized the congregation on December 17, 1920. Stanley wrote that even as he closed the meeting, “[t]here were people back in the congregation crying to go to the altar, and there was no room.”

His Advocate report continues: “I do thank God for leading me up in the mountains of Virginia. This makes ten churches the Lord has helped me to build.”

Ten churches. The effectiveness of this tent ministry in general, and the fervor and faithfulness of G.W. Stanley in particular, intrigues Bishop Beacham. “Where,” he later wonders aloud, “are the G.W. Stanleys of today?”

Even Stanley addresses the question, penning some difficult words for “preachers who are called to preach, and haven’t the faith to believe that God will take care of His own whom He hath called to labor in His vineyard.” Despite their calling, they seem unwilling to go as Jesus commanded. Stanley cannot understand it. “There must be something wrong somewhere with the man, for there are thousands of souls that have never yet heard the real gospel who would accept it if they could hear it.” He continues:

There are people are begging for the gospel. And no one will go tell them about it. There is work enough in front of me that is begging me at present to employ a half of a dozen preachers. It makes my heart ache to see how little folks are sacrificing to carry the gospel to souls that are going to hell. That is one reason that our churches are like they are, people have lost their zeal for the cause that they once had, by looking at the things of the world. The devil is filling them with jealousy and backbiting, consuming one another, killing one another’s influence. 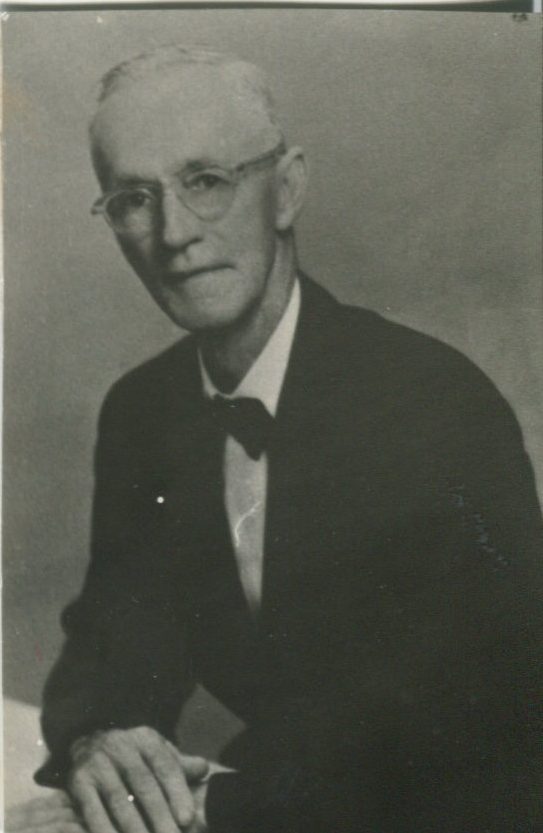 As for Stanley, he makes his own decision clear. He will get back to the fields. As for the six churches currently in his care, he has plans for them as well. “When spring opens I will turn some of these churches over to preachers who won’t go to new fields.” He has plans to buy a new tent, he says, “so I can get into these new places where people have never heard the gospel.”

Jesus’ answer for a ready harvest but a lack of workers sounds similar to G.W. Stanley’s. He sees a bountiful harvest, but not enough workers. The answer, he says, is prayer to “the Lord of the harvest”: “The harvest truly is plentiful, but the laborers are few. Therefore pray the Lord of the harvest to send out laborers into His harvest” (Matthew 9:37-38, NKJV).

While workers remain few, and church planting has become more specialized in recent years, Buena Vista PHC has taken Stanley and his Savior at their word. The church helped to plant in recent years—in nearby Waynesboro and Lexington. And the new pavilion behind the Food Lion promises to be a “city on a hill” for those hungry for the gospel. 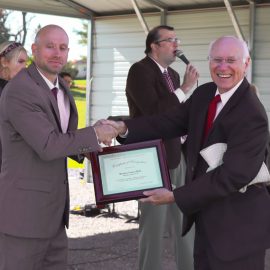 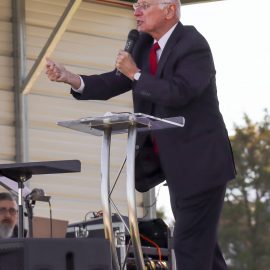 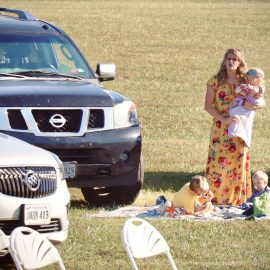 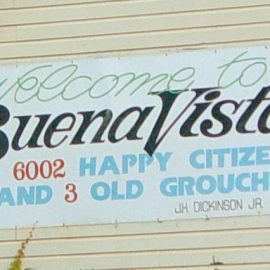 The sun stands nearly overhead when the service dismisses at last. Congregants head home and the guests drive into downtown Buena Vista, home to “6002 HAPPY CITIZENS AND 3 OLD GROUCHES,” to share a meal in the church’s fellowship hall. One of the guests bears witness to God’s faithfulness in this hundred-year old church. She points to the now-hidden baptistry. “I was baptized right there,” she says. “And here I am today.” The group listening nods quietly, receiving her words as the testimony of God’s strength and wonderful works that they are. Then laughter fills the room as Pastor Williams’s five children begin chasing each other around the tables.