6 Lessons to Learn from David- practical guidelines for worship leaders 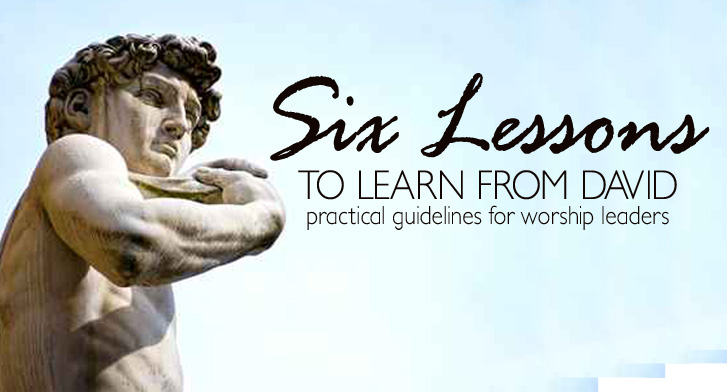 Many anointed worship leaders have gone before us and paved the way. Perhaps the most overlooked worshiper whose legacy lives on is David, the “man after God’s own heart.” Was David perfect? No. However, he possessed a tenacity and integrity that would serve us well to emulate. In 1 Samuel 16-18, we learn many practical guidelines that can be applied to a worship leader’s lifestyle.

When Samuel was sent to anoint a new king, he first saw Eliab, Jesse’s firstborn, and thought he was the one. Speaking of Eliab, God reminded Samuel to “look not on his countenance, or on the height of his stature; because I have rejected him…” (1 Samuel 16:17). If we are not careful, then it is easy to get caught up on our outward appearance as worship leaders. Women especially may at times feel insecurities about their bodies, hair, or clothing; therefore, they may be hindered by fear instead of leading with authority and single focus of mind. You would be surprised at the thoughts that run through our minds as we are ushering in the presence of God Almighty!   God created us in His image…how could we be the judge of whether or not a worship leader is “handsome” or “attractive” enough to lead?

On the flip side, worship leaders must take care to present themselves in a manner that is not distracting to the congregation. Comb your hair, iron the clothes…don’t look as if you just crawled out of bed! God doesn’t require a model-like or body building physique; however, our physical presentation IS an important element in the worship experience. If we are drawing attention to ourselves in a negative OR positive way, then we are defeating our purpose as people who are supposed to point others to God.

David was the youngest brother of eight sons. His own father called him “the runt”. In 1Samuel 17:33, Saul declared to David, “You can’t go and fight this Philistine. You’re too young and inexperienced-and he’s been at this fighting business since before you were born.” Looked down upon because of his age by his father and King Saul, David did not let his age or rank in birth hinder him from boldly doing what God had called him to do.

I am grateful that “when others see a shepherd boy, God sees a king/queen”…I am royalty in His eyes no matter how others may view me. The anointing on your life does not depend on your outward appearance or age. So relax, chin up, and lead on!

In 1 Samuel 16:11, we learn that David was “out tending the sheep” when Samuel came to anoint a new king. Tending the sheep, the everyday, mundane, no fame, no glory, menial task, called to greatness, yet being faithful in the small things! How many seemingly non-important tasks do we as ministers face every single day? If we are not careful, we will negate the insignificant for what society deems significant. However, God is looking for the leader who is faithful to complete the small tasks that He has set before them. How can we be trusted with the big if we can’t handle the small?

Many worship leaders long to do big things for the kingdom, but they fail to show up to rehearsal, to prepare for that difficult set with diligence, to follow up with discipleship amongst your team, and others. Verse 13 declares that when David was brought in from doing the mundane, everyday task, watching and protecting the sheep, Samuel anointed him and “the Spirit of God entered David like a rush of wind, God vitally empowering him for the rest of his life.” What a beautiful example of a man after God’s own heart faithfully doing what he was tasked to do by his earthly father, then being empowered for the rest of his life to do even bigger things! David wasn’t a diva! He was a faithful servant!

I appreciate that while David was doing the “great”, he remained faithful by tending his father’s sheep in Bethlehem. Verses 15-23 tell us that when Saul was elevating David, David was out in the fields tending his sheep. David had rehearsed and honed his skills in his private time and was now called upon to soothe the king’s tormenting moods. David was able to bring peace in a troubled situation. 1Samuel 18:5 says that “whatever Saul gave David to do, he did it well.” What a testimony of someone who was faithful in the small things!

On the flip side, don’t lean too much to the technical side and negate the spiritual aspect of what we do. We depend totally on the anointing of the Holy Spirit. You may have every note and rhythm correct, then be thrown off when God moves in the midst because you haven’t practiced the presence. His presence must not be foreign to you. There will be times when we have to “be still” and we won’t know exactly what to do because of the sovereign hovering of the Holy Spirit. I never want to be guilty of not being comfortable and familiar with His presence. My ultimate goals as a worship leader are to lead others to Him and to allow Him to change me and make me more like Him in the process. David had to “practice war” with lions and bears before he went into war with Goliath. He practiced God’s presence and warfare. Worshipers do spiritual warfare every service! We must prepare spiritually and musically to go before the army and lead the way.

David, in 1 Samuel 17:20-23, was sent by his father to check on his brothers. The Word tells us that David didn’t leave a mess! He “was up at the crack of dawn and, having arranged for someone to tend his flock, took the food and was on his way just as Jesse had directed him.” His work ethic was amazing and lacked nothing. Jessed didn’t have to take care of David’s fields because David did his job. He was up at it early and made preparations for the journey ahead and for his responsibilities behind. Man, what a work ethic that this generation needs more of in this day and age! Practically speaking, if you know you won’t be at particular service, then make preparations to find a trained replacement, get the set list ready ahead of time, clue the pastor in…simple things, yet disastrous results if we don’t take care of business.

When Saul tried to give David his armor to fight Goliath, David had to refuse. He couldn’t wear Saul’s mantle. It didn’t fit! He had to be himself and who God had called HIM to be. We all have worship leaders who have gone before us who have paved the way. I respect so many of the leaders whom I have watched and learned from down through the years. However, if I try to be them instead of me, then their anointing and gifting and talents won’t fit me! I have unique abilities that never made sense to me as a child and teenager. In fact, at times I was embarrassed and tried to hide the abilities because I didn’t quite know what to do with them. But over time, I have come to see how the God-given abilities have aided my musical path. I no longer despise the abilities or hide them, but I have found ways to use them for the glory of God.

Be careful when your gifts make room for you…other people will notice. Saul became jealous of David’s rise in popularity with the people. Sad, but true. 1 Samuel 18:5 shows that “whatever Saul gave David to do, he did it-and did it well…Everybody, both the people in general and Saul’s servants, approved of and admired David’s leadership.” Eventually Saul becomes jealous and creates an interesting life for David. He even wants to kill David. Be yourself, stay humble, and resist pride. “First pride, then the crash-the bigger the ego, the harder the fall” (Proverbs 16:18).

David and Saul’s son, Jonathan, became as close as brothers. Where you found one, you found the other. Inseparable. 1 Samuel 19 portrays the level of Jonathan’s commitment to his friendship with David. Saul called his servants and Jonathan and commanded them to kill David. Because of Jonathan’s deep love and loyalty to David, he found David and warned him of Saul’s plan. As worship leaders, we must choose carefully our friends. We must ask God for discernment in this area of our lives. Wrong relationships can devastate a ministry. We must show love and compassion to all…we must not bear our souls to everyone we meet in the congregation! Honesty, transparency, authenticity, yes. However, there will be times when the enemy will use people to bring confusion, lies and division into your life. Remember, he seeks to “kill, steal and destroy” and will use co-laborers to assist if necessary. I don’t believe that we have to walk around leery of everyone around us. That is not God’s plan for our lives. We should guard our hearts, minds, marriage, and family from the attack of the enemy. The Word teaches us that we don’t have wisdom because we don’t ask for it. Ask for wisdom. Seek discernment. Wisdom and discernment will carry you far down this road called ministry. There have been several occasions where I didn’t have a peace about a person or situation in my life. I was always glad in the end that I listened to that still, small voice. Find a Jonathan in your life. In fact, you are blessed if you find two or even three Jonathans! Hold them in a special place in your life. They are rare and precious! 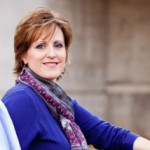 Julie Ely is the worship pastor at Passion Church (www.passionchurch.tv) in Oklahoma City and an Elementary Music teacher in Piedmont, OK. Julie and her husband, Steve Ely, planted Passion Church in 2007. They have two sons, Devin and Tal.