Men gathered from eight churches; included were six pastors of the Cornerstone Conference in North Carolina, men from Kentucky, and from the South Carolina Conference, also, the National Royal Ranger’s Director was there! For nine hours, National Director of Mission: M25, assisted by M25’s secretary, worked together to provide some intense training. The meeting was kicked off with a fantastic meal, prepared by Assistant National Director of Mission M25 and a member of the Journey Church in Siler City, NC.

Why would so many men from so many places sacrifice their time?

It was BATTLE CRY AND KNIGHTS TRAINING weekend!

The opening meeting began with worship led by the worship pastor from the Journey Church, following that was over an hour of challenge, built around the call to manhood and the challenge to “push all the chips” in for the kingdom. Men were instructed to reject passivity, take responsibility for our troubled culture, take the risk and pay the price. A chip with Mission: M25 on one side and Battle Cry on the other side was given to every man, then during a beautiful time of worship, men were challenged to “slap” it on the table, only after prayer and counting the cost. 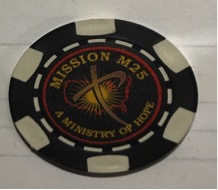 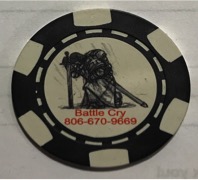 The next morning, after a great breakfast, men settled in for ten classes, group discussions and communion. Classes were “Who Am I,” “What Is Man,” “A Cleansed Life,” “Abiding Life,” “Attitude,” “Obedience,” “Obedience And Personal Purity,” “Position In Christ,” “Obedience And The Tongue,” and “Suffering On Behalf Of Others.”

After the men were tested, those who passed knelt before the National Director and were “knighted,” with the challenge to “Live Pure,” “Speak The Truth,” “Right Wrongs,” and “Follow the King!” When they stood a beautiful 48” sword was presented to them.

It is the prayer and hope of Mission M25 that these men will go back and train others, but most of all, take kingdom advancement very serious. The foundation of the challenge was built upon this truth, we are facing a life and death matter, not only for hurting people but for the church and our nation.