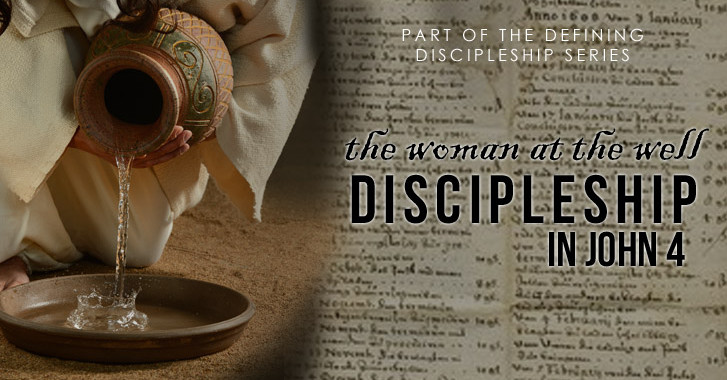 Today I want to continue our discussion of what a disciple of Jesus looks like with particular attention given to John’s portrayal of it. Last time we discussed John 3 and what Jesus’ interaction with Nicodemus contributes to our understanding of discipleship. Now I want us to focus on the narrative of Jesus and the woman at the well recorded for us in John 4:1-42.

John 4 contains a rather curious phrase, “Now he [Jesus] had to go through Samaria” (4:4). Jewish persons took one of two routes of travel between Judea in the south to Galilee in the north (cf. 4:3). They would either go around Samaria or they would travel through it. If this was the case, why does John say Jesus “had to go through Samaria”? This may be an instance of what scholars call “divine necessity.” It simply means that the Father who sent Jesus compelled him to go to Samaria as part of his mission (Morris, The Gospel According to John, 226), a mission to save sinful humanity.

Jesus arrived in the Samaritan town of Sychar around noon (4:6). About that time a “Samaritan woman came to draw water” (4:7). This was strange indeed. This woman came at one of the hottest times of day to draw water, and she did so alone. We’ll see why soon enough. It’s helpful to point out that Jesus meets this woman around noon. Just as John’s pointing out that Jesus’ conversation with Nicodemus occurred at “night” was for the purpose of illustrating Nicodemus’ moral and spiritual darkness, his mentioning of noon appears to foreshadow the Samaritan woman’s positive response to Jesus’ offer of himself.

Jesus initiates contact with the woman by asking her for a drink of water (4:7). This request shocked her, as it would have John’s audience (4:9). The Jewish people and the Samaritans, although neighbors with a common history were quiet antagonistic toward one another. It would appear that the root of the hostilities between Jewish persons and Samaritans rested upon the Samaritans’ refusal to join the Jews in their revolt against Antiochus Epiphanies (166-163 B.C.; see the non-canonical book 1 Maccabees), and the Jews’ subsequent capture of the Samaritans’ capital and destruction of their temple (128 B.C.).

Jesus deftly uses the imagery of water to teach this woman greater truths about himself. Jesus, who is greater than Jacob (cf. 4:12), is able to give “living water” that will quench all thirst and “become … a spring of water welling up to eternal life” (4:10, 13-14; cf. Jeremiah 2:13; Revelation 21:1, 6). Living water is a metaphor for eternal life “mediated by the Spirit” that Jesus offers to all who follow him (Carson, The Gospel According to John, 219).

The woman, who misunderstands the living water Jesus is referring to, asks him to give her some of that water “so that I won’t get thirsty and have to keep coming here to draw water” (John 4:19). It is then revealed to the reader why she did not want to continue to draw water alone day after day. She had been ostracized from her community. It appears she had been married and divorced five times, and the man she was currently living with was not her husband (4:17-18). She was for all extensive purposes alone in the world.

Jesus’ revelation of the woman’s past and current living arrangement led her to perceive that Jesus must have been some sort of prophet, since he being a stranger couldn’t have known about her otherwise (4:19). After explaining to her some truths regarding genuine worship (4:20-24), the woman declares, “I know that Messiah (called Christ) is coming. When he comes, he will explain everything to us” (4:25). The Samaritans were looking for a teaching Messiah, to whom they referred as the Taheb (Köstenberger, John, 158). This stands in contrast to the Jews, who hoped for a royal Messiah who would conquer their oppressors. The Samaritans were apparently awaiting one to fulfill Deuteronomy 18:18, “I [the Lord] will raise up for them a prophet like you [Moses] from among their fellow Israelites, and I will put my words in his mouth. He will tell them everything I command him” (emphasis added). Jesus’ reply says it all: “I, the one speaking to you—I am he” (4:26).

Hearing this, the woman leaves Jesus and her unfilled water jar behind to tell everyone back in town about the “man who told me everything I ever did.” (4:29). At once, the town’s people came out to see Jesus for themselves (4:30). As a crowd was approaching, Jesus begins a conversation with his disciples about doing the work of God the Father. This work included not only Jesus’ own mission (4:34), but also the disciples mission to harvest a crop they had not sowed “for eternal life” (4:36). The reward for this work was not only seeing people enter God’s kingdom, but also the joy experienced by those who had labored (4:36).

The narrative draws to a close with many Samaritan’s trusting Jesus as their Savior (cf. 4:42) because of the woman’s testimony (4:39). Upon the urging of the Samaritan’s, Jesus remained with them for two more days, during which Jesus continued to teach them (4:41). This led to even more believing Jesus was truly the “Savior of the world” (4:42).

What does John 4:1-42 contribute to our understanding of discipleship? First, we are reminded that those who become Jesus’ disciples are called of God. Jesus was led to travel through Samaria and stop at Jacob’s well (4:4). It was also Jesus who initiated a conversation with the woman at the well, a conversation that she certainly had no intentions of starting, given the hostility between Jews and Samaritans (4:9). God through his Spirit is still calling people to enter into a relationship with his Son, Jesus Christ. Second, the call of God to sinners is one that exposes their sin. Jesus speaks prophetically to the woman about her sinful lifestyle (4:17-18) not to condemn her, but to lead her to repentance. Third, we find once again, those who believe in Jesus bear witness to him (4:39, 42). Fourth, Jesus’ disciples are those who bear much fruit (cf. 15:8). This may be implied from Jesus’ use of agricultural terminology with reference to the ministry of his disciples (4:35-38). Rescued souls are the fruit they will bear in ministry for Christ. Fifth, we see that the ministry of Jesus’ disciples are to result in joy (4:36). Sixth, Jesus’ disciples are those who believe in him, that is, trust him as their only Savior (4:39, 41-42). Seventh, we also find evidence of abiding with Jesus. In verse 40 we read that the Samaritans compelled Jesus to “stay” with them, which he did. The term “stay” is the Greek verb menō, which was used in 1:39 of Jesus’ first disciples staying with him. It is the same term used in John 15 to affirm a disciple’s vital union with Jesus. Eighth, it isn’t enough for potential disciples to merely hear about Jesus, they must also hear his words (4:41-42). The place of Scripture in the life of the disciple is paramount. Ninth, and finally, we see that Jesus does not limit his discipleship to men or Jewish persons only. Here a woman from Samaria trusts Christ for salvation and follows him. This is truly fitting given the commission of the Lord to his disciples prior to his ascension, “Therefore go and make disciples of all nations” (Matthew 28:19, emphasis added).

What other characteristics of discipleship do you find in John 4:1-42?