Fifty-six voting delegates and an additional twenty or so visitors were present at Bethel Life Worship Center in Greenville, Pennsylvania, April 28, 2018. I’ve had the joy of visiting this beautiful part of the country on several occasions. Each time, I am reminded that this area has been a place of significance for people who have had great influence in the IPHC: Mrs. Esther Gardner (Bishop Gardner’s mother) was from this city; Rev. and Mrs. Hobart Howard were married in Greenville, Pennsylvania.

Rev. Kent Bell, pastor of Bethel Life, informed me that in 2019 the local congregation will be 100 years old! The conference was formed in the 1920s. We are thankful for the rich history and generations who have gone before us in and from Pennsylvania. 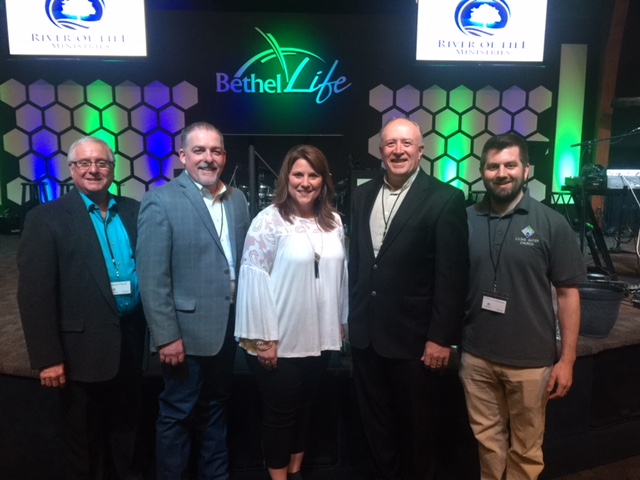 The conference event was divided into two portions. The morning portion from 10-noon was given to worship (led by Rev. Greg Terry), the Arise 2033 video, and teaching/training from Dr. Beacham. It was during this time that I focused on the IPHC 2018 Core Value, “We Prayerfully Value All Generations,” and the Arise 2033 goals.

Following lunch at the church, the delegates met at 1 p.m. till the close of business. During this time two other IPHC videos were shown: “We Prayerfully Value All Generations” and the 2019 “Global Assembly video”. Many people remarked that the All Generations video is one of the most effective they have seen from the IPHC media team.

Dr. Bob Kostelnik presented the Decorum Report and then the Credentials Report. Julia Augustine and Mark Crosby were granted Local Church Minister’s License. Joseph Herr and Joshua Webb received Minister’s License. No one was ordained at this annual conference.

Bishop Dale Adams read the Memoirs Report. The life and ministry of the late Rev. Gene Miller was remembered and celebrated. Following this report, Rev. Kent Bell asked to be granted liberty to remember the life of the late Rev. David Carr. After retiring, David moved to Florida and was no longer a member of the conference. However, his influence in Pennsylvania as a pastor, conference board member, and assistant superintendent, was rightfully recognized and remembered. Rev. Carr also served on the IPHC Finance Committee and was a strong supporter of IPHC World Missions Ministries. During the tenure of Rev. Donald Duncan, Rev. Carr was a consultant with WMM.

Following the Memoirs Report, Bishop Dale Adams presented the State of the Conference. His report included up-to-date reports from Andrew Laddusaw (Evangelism), Bob Kostelnik (Discipleship/Clergy Development), Holly Terry (Children and Youth Camps), and Kent Bell (World Missions and Finance). The conference is financially strong and taking efforts to strengthen and expand their churches. There are congregations in western Pennsylvania and in upstate New York.

During the voting for the two council members at large, Mrs. Denise Bell recognized Mrs. Debbie Adams for her service to the conference as Women’s Ministries Director. Mrs. Adams serves on the IPHC National Women’s Ministries Board and will continue to serve in that role.

The conference closed with Dr. Beacham giving a charge to, and installing, the newly elected Conference Executive Council.