Reworking the Paradigm of Discipleship- A series by Keith Marriner 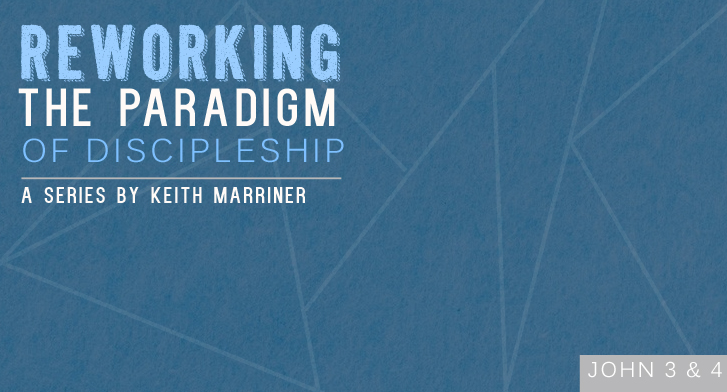 You may recall from an earlier post that Jesus’ conversation with Nicodemus in John 3 served to affirm or provide further explanation of the discipleship paradigm. The narrative really didn’t provide any new features that could be added to the paradigm though. However, Jesus’ conversation with the woman at the well not only affirmed many of the features of the paradigm (disciples being called of God, bearing witness to Jesus, believing in Jesus, and abiding with Jesus) but also brought some new features to light. What follows is a brief reminder of these new features and an up to date “paradigm of discipleship” that will be applied to future biblical texts.

First, we saw that disciples of Jesus are those who bear much fruit. This was evidenced in Jesus’ discussion with his disciples. In that conversation, Jesus applied agricultural terminology to the ministry of the disciples (4:35-38). The disciples were to be about the business of not only sowing seed, but also reaping a harvest. In this particular instance, Jesus was concerned with the harvesting aspect of their ministry. Very shortly a crowd of Samaritans would be standing before them, eager to hear about the “living water” that only Jesus could offer. Later, in the Gospel, Jesus plainly states that bearing much fruit is evidence of discipleship (cf. 15:8). The lives of Jesus’ followers should be fruit producing. There should be evidence of their growth in grace and fruitful gospel ministry.

Second, John 4:36 makes it clear that Jesus’ disciples are to experience joy. In this instance, the joy spoken of is that which is the result of fruitful ministry. But elsewhere in the Gospel, Jesus prays that his disciples would experience “the full measure of [his] joy” (17:13). On at least two other occasions he is concerned that their joy would “be complete” (cf. 15:11; 16:24). Although following Jesus is not an easy road, he does not expect his disciples to be downcast. Instead, their grief is to be turned to joy (cf. 16:20-22). Joy, rather than, despair should characterize Jesus’ disciples.

Third, Jesus’ disciples are those who hear his words. The Samaritans who came to faith in Christ express that they did so not only because of the testimony of the woman at the well, but also because they had heard for themselves from Jesus (4:41-42). Elsewhere in John’s Gospel, Jesus states that his disciples are those who “hold to [his] teaching” (8:31). In order to “hold” (Greek menō) to Jesus’ teaching, that is, live one’s life in light of it, one must clearly hear Jesus speak. For the follower of Jesus today the place where one hears him speak most clearly is through the Word of God, the Bible. Therefore, it is imperative that believers sit under and learn from godly pastors and teachers, those who not only teach rightly, but also live their lives according to God’s Word (cf. 1 Timothy 4:12-16). Christians through the indwelling Holy Spirit are enabled to understand and obey Jesus’ words (cf. John 16:13; 14:23).

Finally, we see that Jesus’ discipleship is not bound by gender or ethnicity. The Samaritan woman was one of several women who were Jesus’ disciples (cf. Mark 15:40-42; Luke 8:1-3; 10:38-42; 24:1-4, 10). Although not apostles, some of these women even traveled with Jesus and his apostles as they ministered (Luke 8:1-3; cf. Matthew 27:55-56). Women were also the first to bear witness to Christ’s bodily resurrection (Matthew 28:5-8; Luke 24:2-9; John 20:1-2, 17-18). Women were and are to be partners in gospel ministry.1 John’s Gospel makes it clear that Jesus’ mission was to all people. Nicodemus, although not a disciple, represented Jesus’ mission to the Jewish people. The woman at the well represented Jesus’ mission to the Samaritans, and the royal official represented Jesus’ mission to the Gentiles (cf. John 4:43-54). One day, Jesus’ disciples will include persons “from every tribe and language and people and nation” (Revelation 5:8; cf. 7:9-10).

Do you struggle with any of the new features of discipleship discussed in this post? If so, which ones? How might you go about displaying them more fully in your life with Christ?

1 The role of women in ministry is a sensitive issue in the church today. Egalitarianism and complementarianism are the two most common positions taken among Evangelicals today. Egalitarians believe there is no biblical basis for restricting any role within the home or church to men only. On the other hand, Complementarians believe the entirety of Scripture teaches the equality of male and female, but they view this as equality of worth and value, and therefore, not incompatible with complementary roles for each gender in the home and the church. Neither position denies that women are to be engaged in ministry. However, the differences between the two positions center on the scope of ministry. For an informed discussion on the role of women in ministry and gender roles from a biblical perspective one would do well to begin with the following works: Stanley J. Grenz & Denise Muir Kjesbo, Women in the Church: A Biblical Theology of Women in Ministry (Downers Grove, IL: IVP Academic, 1995) [egalitarian perspective] and Andreas J. Köstenberger & Margaret E. Köstenberger, God’s Design for Man and Woman: A Biblical-Theological Survey (Wheaton, IL: Crossway, 2014) [complementarian perspective].